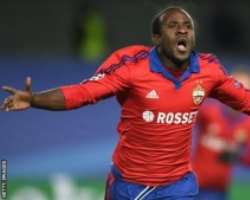 The 28-year-old moves to St James’ Park until the end of the season, with an option to make the deal permanent.

Doumbia joined Roma in January 2015 for a reported £10m but made only 13 appearances before returning to former club CSKA Moscow on loan in August.

Perez has scored 12 goals in 57 Premier League appearances since joining from Tenerife in 2014.

“It is no secret that we have been looking to add to our options in the striking area,” Newcastle head coach Steve McClaren said.

“We have been searching for a forward and were delighted when the opportunity arose to take Seydou on loan.

“He is a natural goalscorer, someone who has scored goals in the Champions League and has played at the highest level. We believe he can make a mark in this team.”

Third-bottom Newcastle are two points from safety with 15 matches remaining.

“I am looking forward to helping the club get some wins and climb the table,” he said.