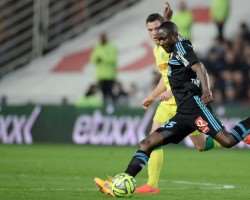 AFP Sport lists the 10 biggest incoming Premier League transfers of the January transfer window after the deadline passed on Monday (* denotes fee approximate and as reported by British media):

Niasse, a 25-year-old Senegal international, arrived at Goodison Park on a four-and-a-half-year contract to provide competition for Belgian striker Romelu Lukaku . He was the Russian Premier League’s Player of the Year in 2015 and scored 13 goals in 23 appearances for Lokomotiv this season.

Jonjo Shelvey
- Swansea City to Newcastle United ; £12 million*
After falling out of favour at the Liberty Stadium, 23-year-old former Liverpool midfielder Shelvey swapped one relegation fight for another by pitching up at St James’ Park. The England midfielder made an immediate impact, playing a role in both goals as Newcastle beat West Ham United 2-1 on his debut. Another England international seeking to force his way into national coach Roy Hodgson’s plans for Euro 2016. Townsend’s final few months at White Hart Lane proved forgettable, with manager Mauricio Pochettino freezing him out after a row with a fitness coach, but Newcastle gave the 24-year-old winger a chance to get his career back on track in the north-east.

A prolific goal-scorer in England’s lower leagues, Afobe scored 32 goals last season for first Milton Keynes Dons and then Wolves. The former Arsenal youth-team player was signed to bolster a Bournemouth attacking department that has lost both Callum Wilson and Max Gradel to long-term knee injuries

Wahbi Khazri
- Bordeaux (FRA) to Sunderland ; £9 million*
Tunisia playmaker Khazri was one of five new players to join struggling Sunderland, who are bidding to haul themselves out of the relegation zone. “Wahbi is a quick, dynamic attacking player,” said Sunderland manager Sam Allardyce. “He has many attributes, not least his delivery from wide areas and set-pieces and of course his ability to score goals.”

Steven Naismith
– Everton to Norwich City ; £8.5 million*
Scotland international Naismith scored a hat-trick for Everton in a 3-1 victory over Chelsea in September, but elected to leave Goodison Park after making only 13 appearances this season. He found the net in his first game in a yellow shirt, drilling home a low shot in a madcap 5-4 home defeat by Liverpool.

Alberto Paloschi
– Chievo (ITA) to Swansea City; £8 million*
Another team seeking an attacking spark in the hope of avoiding relegation, Swansea boosted their options up front by signing 26-year-old Italian striker Paloschi. The move reunited Paloschi with newly appointed Swansea head coach Francesco Guidolin, for whom he played at Parma between 2008 and 2010.

Mohamed Elneny
- Basel (SUI) to Arsenal; £5 million*
Arsenal failed to sign a single outfield player during the close-season transfer window, but injuries to key midfielders promoted manager Arsene Wenger to sanction a move for Egyptian international Elneny. The industrious 23-year-old player had been with Basel since 2013, helping the club to three successive Swiss Super League titles in that time.

Alexandre Pato
- Corinthians (BRA) to Chelsea; loan
Once the great hope of Brazilian football, Pato returned to Europe after kickstarting an injury-plagued career in his homeland. The 26-year-old former AC Milan striker, signed to ease the burden on Diego Costa , described the move as “a dream”.