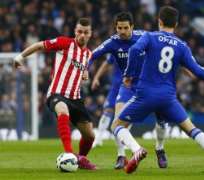 ‘s not often that you can say that a 5-1 win undersells a team’s superiority, but Chelsea’s first competitive visit to Milton Keynes wasn’t your usual game. In front of the biggest crowd to ever watch football at the excruciatingly-brandedstadiummk, a 4th Round FA Cup match was transformed into something approaching a friendly, a half-paced laugher from which only one team could ever emerge.

The Blues were given a mildly difficult time of things by Scunthorpe, who sit a league lower than the Dons and were forced to travel to Stamford Bridge on top of that, so we might have been expecting something of a challenge from the trip to Buckinghamshire. We were rapidly disabused of such notions — our hosts had virtually no interest in defending and fell to pieces whenever Chelsea even hinted at going forward.

The first time Eden Hazard touched the ball the Dons defence completely disintegrated, allowing him to drive up the pitch and slip in Oscar on the right. So catastrophic was the defending that despite being in fine position to shoot, the Brazilian had the even-better option of Diego Costa to his left. That Costa failed to convert was chalked up by the commentary team to good goalkeeping, but in truth it was a monumentally poor effort from the striker, who casually fired into David Martin’s flailing arm with the whole goal gaping.

It wasn’t just Costa who wasted chances. Oscar sent two easy goals bobbling hilariously wide and Branislav Ivanovic had a shot blocked from a corner kick all inside the 12th minute, and it required a spectacular mistake Kyle McFadzean for the Blues to find the opener.

Baba Rahman had let a lovely pass from Oscar run out of play for a throw in, but MK were apparently intent on giving the ball right back. McFadzean, pressured by Costa, seemed caught in two minds about what he should do, and compromised by handing over his wallet. With just Martin to beat, Costa laid the ball off for Oscar, and a sliding finish made it 1-0 to Chelsea.

It might have been more seconds later. Hazard, scampering about as though the last nine months never happened, found Ruben Loftus-Cheek in space in the left channel, but the pass wasn’t perfect and Martin was able to save the shot.

Milton Keynes were so inept that it seemed to be contagious. At the very least, the hosts managed to lull Chelsea into forgetting there was a came, and some incredibly casual play in the midfield had already forced John Terry into a last-gasp foul on Alex Hall before the Blues went ahead. More lackadaisical defending was to follow, and this time it actually hurt.

There were plenty of opportunities to sweep away MK’s rather disjointed 20th-minute attack, but Chelsea spurned them all, most notably through Cesc Fabregas, who contrived to give the ball straight back once possession had been won and then approached a 50/50 as though he needed a stunt double. Still, there was no threat from Darren Potter’s long-range attempt … or so it seemed until the effort struck Nemanja Matic and ballooned over Thibaut Courtois for a goal.

The hosts had equalised so far against the run of play that they weren’t even on the same racetrack, but the fear was that the goal would allow them to regroup and attack the Blues, who still look occasionally vulnerable despite their post-Mourinho unbeaten run. We needn’t have worried, however: nothing changed.

That included Chelsea’s ridiculously bad finishing. Hazard, looking for his first goal of the season, was sent one on one against Martin by a superb, sweeping Fabregas pass, but found his shot tipped onto the post and claimed by the goalkeeper before he could slot home the rebound. Then Baba Rahman got free on the right and set up Oscar for what would have been a tap-in had Costa not interfered and sent the ball wide.

By this point the Blues probably could have been 4-0 up but instead found themselves somehow level, and it was difficult not to laugh about it. Oscar and Costa certainly couldn’t resist giggling as they found themselves sprawled out in the six-yard box, but given the final score, we can probably forgive them their cavalier attitude to the game. It was certainly easy to let it slide in Oscar’s case, because six minutes later he’d put Chelsea back in front.

Again, the Dons defence disintegrated under the slightest of pressure. Ivanovic worked the ball smartly to Loftus-Cheek in the centre, and the young midfielder was allowed the freedom of the pitch before playing in Oscar with a clever reverse pass. It was a difficult finish in a match when even the easy ones mostly missed, so naturally Oscar produced a Demba Ba-style falling-down beauty, lashing his shot just inside the far post to make it 2-1. His next effort was even better. Or, at least, it would have been had the hosts taken the slightest pains to stop it. Having received a straightforward pass on the left flank, Oscar was allowed to come inside, wading through 30 yards of half-hearted tackles before firing in from the edge of the area, a slow-motion highlight in real time. Ridiculous though the defending might have been, it was still a first hattrick for Chelsea since Diego Costa’s last season against Swansea*, and hattricks are always worth celebrating.

*Fun reminder: Oscar would have had one in the reverse fixture had not André Schürrle stolen the goal for 5-0.

3-1 against a team that looked as though they’d never seen a football before was a comfortable halftime score, and the second half was mostly about getting the right people on the scoresheet. Operation Let Eden Hazard Score was duly initiated, and within 10 minutes it was complete.

Potter, the Dons’ scorer, was Hazard’s main accomplice, kicking him in the back of the leg after being sucked in and beaten by some mesmerising combination play. The Belgian went down in the box, and after pausing for dramatic effect Jon Moss pointed to the spot. Hazard strode to the spot and stroked in the penalty to make it 4-1.

Guus Hiddink saw the opportunity to add to the notable scorers list while resting key players. Bertrand Traore was duly introduced at Costa’s expense, and before long he’d found the back of the net as well, converting a cutback from Hazard with a neat first-time finish. It was a marker to celebrate — his first ever goal for the club. There was probably more in it for the Blues if they’d made any sort of effort (and Traore would have had a second had he made cleaner contact with his 78th-minute try), but the game was won and there wasn’t much else to do but make it to the end. And thus the ball was passed about indifferently until everyone got to go home.