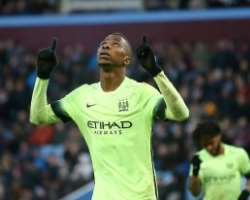 Kelechi Iheanacho concedes that he may have to bide his time for a regular place in the Manchester City line-up, ahead of Tuesday’s Premier League visit to struggling Sunderland.

The 19-year-old Nigerian scored a slick hat-trick in City’s 4-0 FA Cup fourth-round victory at Aston Villa on Saturday, taking his tally in all competitions this season to eight goals from just five starts.

Iheanacho, who took the place of rested top scorer Sergio Aguero at Villa Park, has proved hugely effective coming off the bench for manager Manuel Pellegrini and concedes that he may have to settle for a substitute role against Sunderland.

But with Pellegrini apparently poised to name Iheanacho in his Champions League squad this week, the young forward is dreaming of one day partnering Aguero in City’s front line.

“I am happy to play together with Sergio and hope I can do it for many more years at City,” said Iheanacho, whose side trail league leaders Leicester City by three points.

“I won’t say I will be kicking him out of the team. He is a great player, so I don’t think that will happen. It makes me so happy to play with a player like that. “I am very happy, proud and grateful to score the first hat-trick for City, and the first of my career.

“It’s a great day in my life, but it’s not the greatest day of my life because I need to keep working hard. This is the starting point of my career so I need to keep going.”

Pellegrini will be without three key defenders at the Stadium of Light in Vincent Kompany , Eliaquim Mangala and Aleksandar Kolarov , although the trio could be back training with his first-team squad this week.

French midfielder Samir Nasri is expected to be out for a further two months, a similar length of absence to the one that Belgian winger Kevin De Bruyne can expect after injuring knee ligaments last week.

“We have a squad,” said Pellegrini of De Bruyne’s injury. “In that place we have Jesus Navas, we have Raheem Sterling , we have David Silva , we have Brandon Barker. Fabian Delph can play also on that side with two strikers.”

– Sunderland’s foreign legion –
He added: “This team has played so many different ways (of playing). I think the rest of the squad must have the responsibility to replace a very difficult player to replace.

“I never tried to find an excuse and complain about those things because they are part of the game.”

Sunderland have been among the most active Premier League clubs in the January transfer market, bringing in five new signings for a combined fee of around £15.75 million ($22.4 million, 20.7 million euros) in an effort to help them avoid relegation.

The Wearsiders are second-bottom, four points adrift of safety, but manager Sam Allardyce hopes the influx of new players will provide the impetus required to climb out of the bottom three.

German defender Jan Kirchhoff , signed for £750,000 from Bayern Munich, is the only one of the quintet to feature so far for the Black Cats.

Senegal forward Dame N’Doye, on loan from Trabzonspor, Ivory Coast defender Lamine Kone, a £6 million arrival from Lorient , and Tunisian international midfielder Wahbi Khazri , signed for £9 million from Bordeaux , could all be involved against City.

Allardyce, who is without injured duo Sebastian Larsson and Younes Kaboul , said: “We’ve concentrated largely on bringing in players from abroad, and that can have a risk attached to it in terms of how quickly they adapt to the Premier league.

“But we’ve found that this route provides better value for money in the current market.”