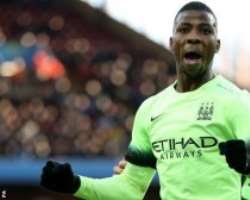 Kelechi Iheanacho scored a hat-trick as Manchester City eased into the fifth round of the FA Cup by thrashing beleaguered Aston Villa.

City went ahead within the first four minutes as the home side failed to clear a corner and Iheanacho swept in a finish from close range.

The visitors doubled their lead from Iheanacho’s cool penalty after Raheem Sterling was brought down in the box.

Iheanacho ran clear for his third goal and Sterling poked in a fourth.

Striker Iheanacho could even have had four but failed to connect with a shot after making a run into the opposition box and Fernandinho’s long-range drive was pushed over by goalkeeper Brad Guzan.

This was potentially a tricky tie for City, against a Villa side who were unbeaten in their last five games in all competitions. But the away side took control by scoring twice within the first 24 minutes.

City’s progress into the fifth round keeps alive their hopes of an unprecedented quadruple as they lie second in the Premier League, in the knockout stages of the Champions League and face Liverpool in the final of the League Cup.

Ahead of the match, boss Manuel Pellegrini played down talk of winning all four trophies this season, but on this form City will take some stopping, even with the likes of Yaya Toure, David Silva and Kevin de Bruyne missing.

And having left Sergio Aguero on the bench, 19-year-old Nigerian Iheanacho stepped up to show his potential with a calmly taken treble and has now scored eight times in his debut campaign.

No. Bottom of the league and the lowest scorers in the division, Villa were outclassed and rarely threatened to make a breakthrough in the match.

Idrissa Gana forced Willy Caballero into a sprawling save from long range and Carles Gil’s free-kick was well saved by the City goalkeeper, but that was the closest they came. Striker Jordan Ayew was anonymous in the match.

Swathes of empty seats were visible inside Villa Park, with thousands of home supporters deciding not to attend the match. Only 23,636 turned up for the competition in which their team reached the final last year.

Have they accepted their fate of relegation to the Championship? Villa have won more cup matches this season (3) than league (2), and they are 10 points off safety with 15 games to go. They will need a huge turnaround to preserve their status in the top flight. On this dismal showing, it looks highly unlikely.