CHAN: How Guinea beat Nigeria to advance to quarter final 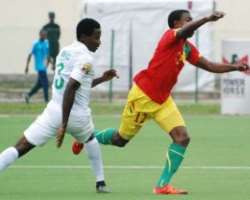 Nigeria have crashed out of the 2016 African Nations Championship after bowing 1-0 to Guinea in their final Group C encounter played at the Umuganda Stadium, Gisenyi.

Ibrahima Sankhon's first half strike dashed the hopes of the Super Eagles reaching the quarter final of the competition despite staying atop Group C after their first two matches.

The Syli Nationale dominated the first 45mins as they enjoyed great possession but saw  their clear call for a penalty waved off by Moroccan referee El Jaafari when Nigeria’s Jamiu Alimi handled the ball in the penalty area.

Nigeria’s first clear opportunity came in the19th minute when Usman Mohammed was brought down just at the edge of the box but defender Chima Akas effort went over the crossbar.

Both teams were forced to make early substitutions due injury worries as Guinea's  Alseny Camara and Nigeria's  Usman Mohammed were replaced with Ibrahima Bangoura and Bature Yaro respectively.

Coach Bangoura's men, however took the lead on the stroke of half time after Daouda Camara eased past the Nigeria's defence to lay an assist for Sankhon who slotted in to an empty net – with the Super Eagles' defence caught off guard. Coach Sunday Oliseh was forced to make an early substitution in the second half with the introduction of the team’s topscorer Chisom Chikatara for Paul Onobi in a move to get the desired result.

The Guineans held on to their lead as they played more defensive with little attacking threat but the Super Eagles couldn’t break through as they lack creativity.

The Super Eagles were unable to level up before the end of regular time to savour a point for qualification as they finished in the third position behind with 4points behind leader Tunisia with 5points and Guinea 5points.

In his reaction to the defeat, Sunday Oliseh said that losing 1-0 to Guinea in last group C match of the Africa Nations Championship, was something he and his team did not envisage.

He regretted the loss coming after the Super Eagles have chalked up four points from their two previous matches and only needed a draw against Guinea to advance to the quarter-final.

“We apologise to Nigerians for this loss, we never planned to exit the tournament this early. The boys gave their best,” said a sober Oliseh after the game.

NFF president, Amaju Pinnick reiterated that the African Nations Championship is “both developmental and preparatory for bigger challenges,” and said without mincing words that the Federation would now shift focus to the qualification race for the 2017 Africa Cup of Nations.

“We apologise to Nigerians for the poor outing of the Super Eagles in Rwanda, but we toe the line of CAF which states that CHAN is a developmental and preparatory competition. Of course, as Nigerians, we love to win always, and we feel bad when we don't.

“I want us to take the positives from this tournament. A player like Chisom Chikatara broke onto the global platform and players like Usman Mohammed,  Chima Akas, Ikechukwu Ezenwa, Austin Oboroakpo and Ifeanyi Mathew confirmed their class.

“For me, it is disappointing that we did not progress. But the NFF will now focus on the 2017 AFCON qualifiers, and start preparations early for the remaining rounds,” Pinnick said.