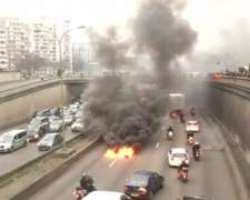 Taxi drivers have blocked a major Paris road, in a protest at competition from app-based taxi services including Uber.

The drivers, who were also protesting against unlicensed cab firms, joined a nationwide public sector strike.

At least 20 taxi drivers were arrested for “violence, carrying weapons and starting a fire”, police said. Some had set bonfires on the road before dawn.

Firefighters later extinguished them.
Dozens of protesting taxi drivers tried to march onto an eight-lane bypass but were pushed back by police using tear gas.

There are reports that two people were injured at Orly airport when a shuttle bus tried to force its way past a blockade of taxi drivers.

Police said about 1,200 taxi drivers were protesting in Paris, while others disrupted traffic in Toulouse, Lille and Marseille.

About 5.6 million people went on strike on Tuesday, over wages, working conditions and the cost of living.

Unions say they are also protesting against job losses.

One in five flights were cancelled at Paris airports as air traffic controllers stayed off the job. – BBC.