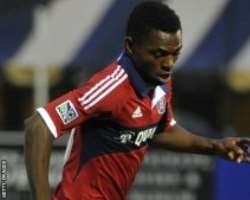 Cameroon beat DR Congo 3-1 to reach the quarter-finals of the African Nations Championship in Rwanda.

The Indomitable Lions advance to the last eight as Group B winners, with DR Congo going through as runners-up.

Yazid Atouba made it 1-0 to Cameroon just before half-time but Jean Makusu equalised straight after the break.

Cameroon will play Ivory Coast in the next round and DR Congo face hosts Rwanda. Both games will be played on Saturday.

Angola beat Ethiopia 2-1 in Monday’s other Group B game to record their first points of the tournament as both sides bowed out.

Goals by Papel and Manuel Alfonso gave Angola a 2-0 lead and they saw off a threatened comeback from Ethiopia, who pulled a goal back through Tesfaye, to end their tournament on a high note.