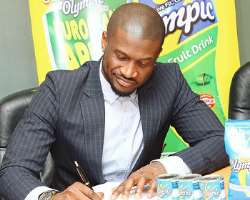 Nigeria's singing duo, the P-Square brothers seems to have planned well for the year 2016 as they have partially put their music on hold while they try their hands on other ventures.

Recently, fans were surprised when Paul Okoye, unveiled his new artiste under his new record label, Rudeboy Records. Though this got many talking but fans are yet to understand what the brothers are actually up to.

He disclosed that the agency will be responsible in unveiling young talents from grassroots since he is familiar with the youths especially at Omole area of Lagos state where they all reside.

He explained that his passion for football drove him into establishing the agency as he has been a strong supporter of the local club in the area, Omole FC.

In his words, “When I was a kid I dreamed of becoming a professional football player. Like you all know we were playing football before we finally decided to settle for music and now we are professional and established musician but still dreaming of playing. Personally I have always been passionate about football and in other to give back I decided to sponsor a football club in OMOLE where we reside.

"I have been sponsoring the club for more than 5yrs now known as OMOLE FC. I have already sponsored two players from the team to Europe in 2015, while more of them are scheduled to travel abroad for trial this year. Now I have decided to take it up big time and setup a Football Management Agency as a platform to help grassroots football. Welcome to my world of FOOTBALL. P-Classic Football management.”