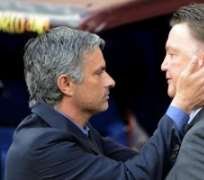 An alleged divide has erupted in the Manchester United boardroom regarding whether the club should stick with incumbent manager Louis van Gaal or sack the Dutchman in favour of a move for Jose Mourinho.

According to Paul Hetherington and Harry Pratt of the Daily Star on Sunday, Ryan Giggs also has his supporters at Old Trafford, but United’s figureheads are split on their managerial future. An extract from the Daily Star‘s report read:

United's executive vice-chairman Ed Woodward – who holds the chief executive role too – is still hoping that current boss Louis van Gaal finishes the campaign strongly. That would see Van Gaal, 64, still in charge next season, when he enters the final year of his contract.

But one influential voice at the club believes Mourinho, who turns 53 on Tuesday, should get his wish to finally manage the club given his trophy-winning record.

A chorus of boos rang around the Theatre of Dreams at full-time on Saturday after the Red Devils suffered a 1-0 home defeat to Southampton , leaving the club fifth in the Premier League with 15 games remaining.

Assistant Ryan Giggs served as manager in an interim basis following David Moyes’ sacking in April 2014. Metro‘s Chris Winterburn has asserted Mourinho as a more experienced and logical successor, however:

On Sunday, the Independent‘s  Miguel Delaney  reported the Portuguese tactician wrote a six-page letter to United defining why he should be their choice to replace Van Gaal and take the club back to its former glory.

However, Mourinho’s agent, Jorge Mendes, took to the official website of his agency, Gestifute , (h/t Press Association and  Daily Mail ) to quash claims Mourinho had gone begging for the position: “It does not occur to anyone that a coach like Jose Mourinho can write letters to clubs offering their services. It is absolutely ridiculous and totally absurd.”

Despite the unceremonious manner in which he left Chelsea in December, Mourinho boasts a glittering trophy collection, including domestic titles in England, Spain, Italy and Portugal, along with two Champions League crowns.

What’s more, the Guardian‘s Daniel Harris pointed out the alleged letter, if proved to be genuine, as an indicator of Mourinho showing the kind of humility of which the club may not have otherwise been aware:

According to Hetherington and Pratt, the final decision on who is appointed Van Gaal’s replacement, and when that is, lies with the owners, the Glazer family.

However, Samuel Luckhurst of the Manchester Evening News has said that responsibility would be delegated to Woodward:

One of the biggest clubs in the world faces a tremendous task in restoring the success of years gone by, but the case may be that management isn’t the club’s only problem, and that the issues are far more deep-rooted.

Manchester United’s head honchos remain split in their opinions of who should be next to take the reins, but recent years suggest it may be the decision-makers themselves who could be held accountable.