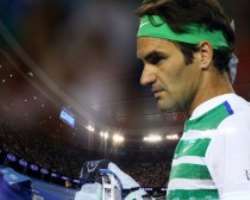 Roger Federer may never win another grand slam again. As it is his haul of 17 majors is unprecedented in the men’s game.

But the Swiss set another record Friday and this one is testament to his sustained excellence at the tournaments that matter the most.

When Federer swept past a player often compared to him, Grigor Dimitrov, in the third round under the roof at the Australian Open, he became the first man to achieve 300 singles wins at grand slams.

“Yeah, you look deeper into it, I guess, where it’s all happened and how. So it’s very nice. I’m very happy.”

Given he has no plans to quit anytime soon — he has suggested he’ll play through 2017 at the very least — it’s almost a certainty the 34-year-old will surpass Martina Navratilova’s all-time record of 306 victories when he lines up at the French Open in May.

Indeed it was a day of milestones at Melbourne Park despite rain disrupting play, with Maria Sharapova needing a third set but then seeing off a plucky Lauren Davis 6-1 6-7 (5-7) 6-0 to notch her 600th professional win.

The title for Williams would give her 22 majors, which would tie the 34-year-old with Steffi Graf for the Open Era record. Attempting to derail the American in the fourth round is 58th-ranked Margarita Gasparyan.

Battle of friends
Federer and Dimitrov know each other well.
Federer and his longtime agent Tony Godsick formed a management company, Team8, in 2013 and Dimitrov — dating pop superstar Nicole Scherzinger after a long relationship with Sharapova — is part of the roster.

From a client standpoint, Federer might be a tad disappointed with the 24-year-old.

When he reached eighth in the world and made the Wimbledon semifinals two years ago, it seemed like Dimitrov was well on his way to mixing it with the elite on a regular basis.

Yet he now sits at 28th and will dip further after being unable to defend his points from 12 months ago at the Australian Open.

Dimitrov made yet another coaching change last year, too, teaming up with Franco Davin, formerly in the corner of another player in the Team8 stable, Juan Martin del Potro.

There may have been health concerns for Dimitrov on Friday, as he was seen by the trainer for an elbow injury, but the bottom line was his fifth loss in as many matches against Federer.

When the pair met in Brisbane two weeks ago, Federer had to overcome a health issue of his own — illness. In his last 15 matches against the top-10, Dimitrov’s record is a lamentable 2-13, both triumphs coming against Federer’s fellow Swiss, Stan Wawrinka.

“I think last year was a learning curve for him,” Federer said. “So I think this year’s got to be better for him. I think the beginning of the year and the off-season was important for him.”

For Federer he next confronts another pal and someone who has passed Dimitrov in rankings, the Belgian David Goffin.

Proud number
Sharapova handled Davis, one of the shortest players top-tier tennis has ever seen at 5 feet 2 inches, with ease in the first and third sets. The second brought drama.

Davis appeared to have missed her chance in the tiebreak when she netted a shot with Sharapova well stranded at 5-4 to end a breathtaking 27-shot rally. Federer looked on from the locker room in amazement; his match followed Sharapova’s so he was keeping track of proceedings.

Davis, whose father Bill, a cardiologist, wrote the foreword to Novak Djokovic’s book “Serve to win,” took the ensuing two points to the crowd’s delight to force the decider. It was, ultimately, lopsided.

“I think it’s a proud number,” five-time grand slam winner Sharapova, who faces Swiss teen Belinda Bencic in the fourth round, said of reaching 600 wins. “I’ve played for many years. I don’t think about those numbers until I finish the match and someone does mention it. I think it’s a good fact that I’ve been able to win that many matches.”

Unless she has a change of heart, Vinci contested her last match at Melbourne Park, since she intends to call it quits at the end of this season.

When the charismatic 32-year-old raced to the first set, no one could have foreseen a turnaround.

But the 20-year-old Friedsam, bamboozled when she played a similar type of player at a warmup event in Shenzhen two weeks ago, Agnieszka Radwanska, recovered to make the third round at a major for the first time. A year ago, Friedsam extended Williams to three sets at the French Open.

The fourth-seeded Radwanska and Friedsam will tangle again Sunday.

Defending men’s champion Novak Djokovic, bidding for a sixth crown overall at the tournament, improved to 12-0 against Andreas Seppi after downing the Italian 6-1 7-5 7-6 (8-6). Djokovic has won 19 straight sets to begin 2016 although the Serb wasn’t in vintage form Friday. That may give fourth-round challenger Gilles Simon slight hope.

Differing fortunes for Aussies
Nick Kyrgios and Daria Gavrilova combined to lead Australia to Hopman Cup glory this month. They both played Friday but only one survived — Gavrilova, a Melbourne resident who formerly represented Russia.

The ever controversial Kyrgios criticized chair umpire James Keothavong for not taking action when he felt music was being played in the stands, and appeared distracted the first two sets versus the sixth-ranked Tomas Berdych under the lights. It cost him.