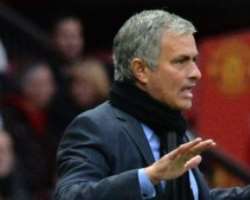 Jose Mourinho wants to work, in the Premier League, for Manchester United, in the very worst of ways, apparently.

[ FOLLOW: All of PST's PL coverage ]
According to a report in the Independent , the former Chelsea manager, who was fired last month , has written a detailed, six-page letter to the Man United executives in an attempt to land his next job. The letter is said to reinforce Mourinho's strong desire to manage a club of United's stature, as well outline his short- and long-term plans for turning around a club which has steadily trended in the wrong direction since the retirement of Sir Alex Ferguson at the end of the 2012-13 season.

With United currently sitting fifth in the PL, and the side showing no signs of upward movement or the kind of attacking football the club's massive fanbase came to know and expect under Ferguson's reign, Louis Van Gaal 's future is very much in doubt. At this point, every successive game seems to arrive with the “Van Gaal must win this weekend, or he's gone” caveat. Saturday's 1-0 defeat to Southampton , in which the Red Devils failed to score in the first half at home for an 11th-straight game, will do Van Gaal no favors.

Mourinho worked as an assistant to Van Gaal at Barcelona from 1997-2000. The Portuguese is said to remain respectful of his former mentor's tenure at United, not wanting to step on the Dutchman's toes too much, but as the likelihood Van Gaal will be fired in the summer, if not before, becomes more and more apparent, Mourinho is said to be stepping up his search for employment.

Just this last week, United were forced to deny having met with current Bayern Munich and soon-to-be Premier League manager Pep Guardiola, who has yet to decide his next club after announcing last month he will leave the Bundesliga giant this summer.

The on-field product might be an absolute bore at the moment, but at least the off-the-field bit is as entertaining as it's ever been.