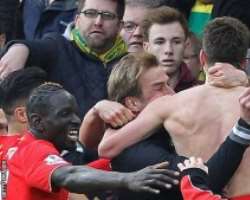 Roberto Firmino scuffed the Reds ahead but Dieumerci’s Mbokani’s backheel levelled and Steven Naismith’s debut strike put the home side in front.

James Milner put the away side ahead and though Sebastien Bassong netted in added time, Lallana delivered a twist.

The England midfielder’s volley – which was fired into the ground and bounced agonisingly in for the home side – sparked chaotic scenes as Reds boss Jurgen Klopp raced along the touchline to celebrate with his players.

Just moments earlier, Klopp had been visibly incensed by his side’s lapse in allowing Bassong to level – but the change in his mood was fitting in a game which ebbed and flowed like this one.

The German had his glasses knocked off by striker Christian Benteke during the celebrations and later said: “I have a second pair of glasses but I can’t find them. It’s really difficult looking for glasses without glasses.”

Norwich scored their second goal attacking Liverpool’s left side and won a penalty down that flank. This graphic shows the Reds made far more tackles on the right of the field, so do they need to be stronger down the left?

The contrast in emotion on the touchline was as pronounced as anything the season has delivered so far and Norwich will have to recover before Tuesday’s trip to Tottenham.

Their record now stands at 32 Premier League games without a win in matches where they have fallen behind – but having been 3-1 up, few will sting like this.

The first five shots on target in this game found the net and neither side could claim to have deserved a win, with each guilty of lapses which at times led to chaos and resulted in just the fourth 5-4 result in Premier League history.

Russell Martin will feel worse than most after gifting Milner the chance to put Liverpool 4-3 up with a weak, blind backpass.

And though Bassong’s crisp strike from 20 yards appeared to have reprieved his fellow defender, substitute Lallana’s first league goal of the season capped a frenzied finish.

Reds must buy to relieve the stress
The Reds are four points worse off than at this stage last season but could this win be a catalyst for a spell of consistency and a move higher than seventh place?

One wonders what reception Liverpool’s players would have got from the German had it stayed 4-4, such was his demeanour, and his side masked some common inefficiencies in taking three points.

Mbokani’s brilliant back-heeled finish arrived after failing to clear a corner, meaning the Reds have conceded eight goals from corners this season – a league high.

Their passing – at 75% accuracy – was not at its best, their defending was sometimes rash but they found key goals, despite having scored fewer times than relegation-threatened Sunderland before kick-off.

Much has been made of the need to sign a striker but after such a result, neglecting their defensive issues seems a big risk for Klopp who will surely be keen to have less stressful afternoons in the dugout.

Neil not happy with Norwich ‘shambles’
“When you concede five goals you deserve to lose the game,” concluded Norwich boss Alex Neil after the match.

The Scot admitted defensive errors have been his side’s “downfall” this season and the 43 goals they have leaked in 23 games paints a damning picture – and only Sunderland (45) have let in more.

However, the performance of Naismith at the other end does offer something positive to take forward.

Making his debut alongside full-back Ivo Pinto – who had a tough afternoon – Naismith showed quality throughout.

He managed 18 goals in 52 league starts at Everton but may need to adopt the role of talisman rather than impact substitute at Norwich if they are to survive.

That said, they have now conceded 11 goals in three games – a stat which must improve if any Naismith contribution is to prove telling.

The stats you need to know
Steven Naismith has now scored his first Premier League goal for both Everton and Norwich against Liverpool.

Liverpool have conceded from their first shot on target faced in all four of their Premier League games in 2016.

The Canaries have conceded a league-high 21 Premier League goals in the last half hour of games this season, six more than any other team.

This is only the third time in Premier League history that Liverpool have recovered from two goals behind to win an away game – also against Manchester City in October 2008 and Fulham in October 2004.