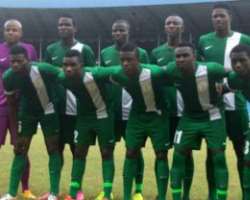 Nigeria will take on Tunisia in their second game of the 2016 African Nations Championship in Rwanda on Friday afternoon.

Henryk Kasperczak's boys will be hoping to grab a maximum three points against the Super Eagles in order to boost their chances of making it to the next round after a worrisome 2-2 draw against debutants Guinea in their first game.

For the Super Eagles, they will be hoping to book an early flight to the quarter final after a commanding 4-1 defeat of Niger Republic in Kigali.

Tunisia are one of the few teams yet to lose a game since the inception of the competition – and they would be buoyed by this to stop the rampant Nigerians.

Kasperczak's team boast of players from the top Tunisia clubs and the man to watch out for is Etoile du Sahel's forward Ahmed Akaichi who scored a brace in their first game against Guinea.

The Super Eagles must improve on their first half performance and be more clinical in front of goal. And they should be wary of the skillful north Africans whose strength is in their counter attacking play.

Coach Sunday Oliseh will surely stick to his 4-3-3 formation with Chisom Chikatara, Usman Mohammed expected to get a starting shirt after pulling off an applauding performance against Niger.