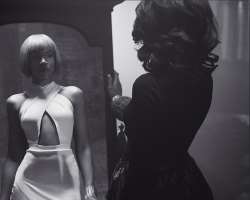 Nigerian Superstar Seyi Shay has announced an Instagram competition for her fans and as a follow up for her highly publicised album release last year.

The competition "Seyi or Shay Instagram Karaoke" was announced on her instagram page late last night with an instructional video and rules on how the competition will be put in place. Lucky fans have the opportunity to win an Ipad, Android phones and other amazing prizes from Etisalat, CLOUD 9 and Pepsi.

To participate, fans and followers should post 15 second videos of themselves singing the chorus of their favourite song off Seyi Shay's debut album "Seyi or Shay", mentioning @iamseyishay & including hashtags #SeyiorShay #SeyiorShayInstagramKaraoke. Singles "Right Now", "Murda", "Jangilova" & "Crazy" do not apply for this competition.

Seyi Shay will repost 20 entries with the most likes that followed all the rules. The video that gets the most likes on Seyi Shay's page wins an iPad, while the first and second runners up win Andriod phones, other runners up stand a chance of winning other amazing prizes from Etisalat, CLOUD 9 and Pepsi.

Please find below the rules of the competition and find attached the instructional video.Start uploading your videos, the competition closes on the 26th of January 2016.