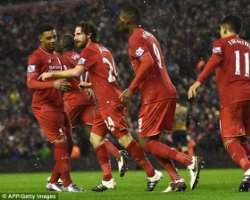 Liverpool and Arsenal played out a six-goal thriller at a snowy Anfield on Wednesday with the Gunners fighting back twice in the first half to make it 2-2, but then gave up a lead in injury time as Joe Allen equalized in dramatic fashion.

Roberto Firmino twice gave Liverpool the lead, his second a stunner, but equalizers from Aaron Ramsey and Olivier Giroud capped off a mad opening 25 minutes of action with four goals traded in 15 first half minutes.

Giroud's clever turn and strike in the second half looked to have sealed the win for the Gunners as Liverpool's defending left a lot to be desired, but Jurgen Klopp side never gave up and Allen's cool finish grabbed them a point with Arsene Wenger.

With the draw Arsenal stay top of the table but it will feel like two points dropped, Liverpool are on 31 points after battling back.

Liverpool started brightly and were 1-0 up inside the first 10 minutes with Emre Can drilling a low shot in on goal that Petr Cech could only palm out and Firmino coolly slotted home the follow-up to put the Reds ahead.

That goal gave Liverpool confidence but Arsenal were level after 14 minutes with an aerial challenge from Giroud causing problems, then Joel Campbell calmly brought the ball under control and slotted in Ramsey to thread the ball past Simon Mignolet at the near post. 1-1.

A pulsating clash continued to ebb and flow with Liverpool back in front in stunning fashion inside 20 minutes. Jordan Henderson and James Milner hunted down the ball and it fell to Firmino who curled home a superb strike for his and Liverpool's second of the game. 2-1.

Less than 25 minutes in Arsenal were level as first Mamadou Sakho cleared an effort off the line but from the resulting corner a wicked ball to the near post was flicked on by Giroud and the Frenchman wheeled away as Mignolet was beaten. 2-2. Before half time Giroud had another chance from close range which he fluffed horribly with the goal gaping and Liverpool managed to clear.

Theo Walcott and Emre Can both went close before the break as a breathless encounter at Anfield reached half time.

Milner's cross found Adam Lallana unmarked at the bask post early in the second half but the England winger drilled his volley over the bar and Liverpool were made to rue their missed chances.

Campbell, again, was the architect as his ball into the box found Giroud and the Frenchman rolled Sakho before firing low into the corner for his second goal of the game. 3-2.

Alberto Moreno's deflected shot squirmed just wide and Firmino's header flashed past the post late on as Liverpool pushed hard for an equalizer, and it finally arrived as the snowflakes fell at Anfield.

Allen latched onto a loose ball and calmly slotted home. 3-3 and a thrilling game ended in fittingly dramatic fashion.