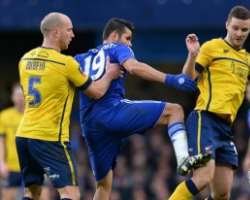 Diego Costa ended another troubled week on a high note as the striker put Chelsea on course for the FA Cup fourth round with the opener in their 2-0 win over third tier Scunthorpe on Sunday.

Costa and team-mate Oscar almost came to blows before being separated by their fellow players after an aggressive knee-high tackle on the Spain striker by his Brazilian colleague sparking a furious exchange during a training session this week.

Blues interim boss Guus Hiddink had tried to laugh off the incident, but the ugly scene was the latest controversial moment involving the temperamental Costa and threatened to cast a shadow over the start of Chelsea’s bid to win the FA Cup for the first time since 2012.

Costa was on his best behaviour on this occasion as he put the Blues ahead early on at Stamford Bridge before teenage midfielder Ruben Loftus-Cheek came off the bench to seal the win with his first Chelsea goal in the second half.

Hiddink is now unbeaten in four matches since replacing the sacked Jose Mourinho in December and, after winning the FA Cup in his previous spell as Chelsea interim boss in 2009, he must be dreaming of a return to Wembley in May.

Inevitably, Costa was in the thick of the action as Chelsea took the lead with their first incisive attack in the 13th minute. Branislav Ivanovic whipped a dangerous cross towards Costa, whose run caused panic in the Scunthorpe rearguard.

As Costa stretched to reach the ball in the six-yard box, he got the slightest of touches to divert it goalwards before a deflection off Scunthorpe defender Laird sent it into the far corner.

Costa’s eighth goal of the season, and his fourth in his last three appearances, was the prelude for a period of sustained Chelsea pressure. Guus Hiddink is unbeaten in four matches since replacing&nbsp;&hellip;

Fabregas also unfurled a long pass that put Pedro Rodriguez through on goal for a fierce shot that Daniels pushed over.

Oscar had publicly played down his row with Costa and there appeared to be no lingering bad feelings as Costa set up the Brazilian for a shot that curled narrowly wide from the edge of the penalty area.

Battered in the opening stages, Scunthorpe finally had their first sight of goal when Gary Cahill bravely used his head to block Stephen Dawson’s stinging strike.

It was at that point that Hiddink’s team began to lose a little focus and it needed a superbly timed challenge from Kurt Zouma to repel a dangerous break from Luke Williams just before half-time.

Chelsea had suffered a humiliating fourth round exit from the competition against third tier Bradford last season despite holding the lead at one stage.

And Hiddink, sensing Chelsea were in danger of losing their grip again, tried to perk up his side by sending on Loftus-Cheek in place of Oscar at the interval.

Scunthorpe, mid-table in League One, pressed forward boldly and had a penalty appeal rejected by referee Craig Pawson when Kevin van Veen tumbled after being tripped by Ramires just inside the Chelsea area.

It was a contentious decision and possibly a lucky escape for the Premier League champions, who made the most of their fortune with a second goal in the 68th minute.

Cesar Azpilicueta advanced down the left before cutting a low cross back towards Loftus-Cheek and the 19-year-old Londoner steered home a cool finish from 10 yards.

Jordan Clarke almost gave Scunthorpe a memorable consolation in the final moments, but his blistering shot cannoned back off the woodwork.