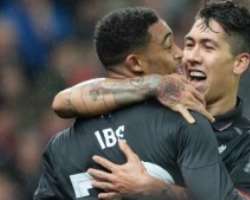 Jordon Ibe scored the game's only goal as Liverpool defeated Stoke City, 1-0, in the Capital One Cup on a cold and rainy Tuesday night at the Britannia Stadium.

With an away goal, the Reds have the upper hand heading into the second-leg of this semifinal matchup, scheduled for January 26 at Anfield.

Rain poured down throughout a first half that was dominated by Liverpool, as the Reds pushed forward while Stoke struggled to create anything on the attack.

However, Philippe Coutinho and Dejan Lovren were both forced off with hamstring injuries, replaced by Jordon Ibe and James Milner respectively. Coutinho went down after 20 minutes while Lovren lasted just past the half-hour mark.

Despite the injuries Liverpool continued to control play, and it was the substitute Ibe who found the game's first goal in the 37th minute. Adam Lallana rushed down the right wing and played a ball across to Joe Allen , who completely scuffed his attempt on goal. However, Allen's mishit fell perfectly to Ibe, who smashed a left-footed shot past Jack Butland and into the back of the net.

Stoke manager Mark Hughes was irate on the touchline, screaming at his players as the Potters looked extremely out of sorts in the first 45.

Hughes would try to generate more attack with a substitution at halftime, replacing holding midfielder and United States international  Geoff Cameron with a striker in Jonathan Walters . The move would help, as the Potters created more chances in the opening ten minutes than they did in the entire first half. However, Liverpool goalkeeper Simon Mignolet never really came under threat, as Stoke had a poor day overall.

The Potters must now climb out of a hole at Anfield in three weeks time to try and secure a spot in the League Cup final.