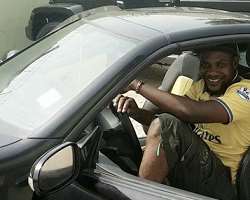 Popular Nigerian comedian, MC Shakara, has began the new year in high note as he has joined the league of celebrities who have increased their garages either on the eve of the end of 2015 and early 2016.

The comedian who has been able to make a name for himself since venturing into the Nigerian comedy business some years back has just acquired a One Door Mercedes Benz.

MC Shakara has been one versatile comedian, who has tried to ensure that his relevance in the industry does not go unnoticed as he chooses to maintain a low profile status while gracing various stages as the months go by.