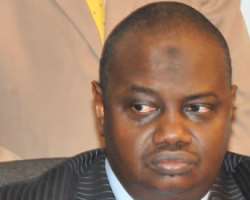 The Attorney-General of the Federation (AGF) and Minister of Justice, Mr. Abubakar Malami (SAN), has said the petition, accusing the immediate past Chairman of the Economic and Financial Crimes Commission (EFCC), Mr. Ibrahim Lamorde, of diverting about N1tn seized by the anti-graft agency from corruption convicts, will not be overlooked.

Malami, in a telephone interview with our correspondent, admitted that investigation into the allegation required time.

The AGF added that any petition, as long as it had to do with corruption, would not be overlooked.

The minister said, 'It is just a matter of a little patience over issues. As you know, investigation takes a lot of consideration, a lot of revelations; but whatever it is, as long as the petition relates to corruption, it cannot be overlooked.

Click here for details
Before Malami was appointed the AGF, the Federal Ministry of Justice had directed the EFCC to investigate the allegation that Lamorde diverted about N1tn proceeds of corruption recovered by the anti-graft agency.

The ministry's directive followed a September 18, 2015 petition to the then Solicitor-General and Permanent Secretary, Federal Ministry of Justice, Mr. Abdullahi Yola.

The petitioner, who is the Chief Executive Officer of Panic Alert Security Systems, a security firm, George Uboh, had sent a reminder dated September 28, Yola, threatening to sue the minister if he failed to respond to his petition within seven days.

Uboh had, in his petition, asked the justice ministry 'through which the EFCC derives its power to prosecute or immediately rescind the fiat to prosecute criminal suspects from EFCC.'

He also sought an immediate issuance of 'fiat for the prosecution of EFCC's past and present leadership and their known and unknown co-conspirators via the 22-page preliminary criminal charges the undersigned has prepared.'

Uboh, who had earlier petitioned the Senate Committee on Ethics, Privileges and Public Petitions, levelling the same set of allegations against Lamorde, received the ministry's letter, dated October 8, 2015.

The letter was signed by the Director, Public Prosecutions of the Federal Ministry of Justice, Mr. Muhammad Diri, on behalf of the Permanent Secretary.

Copies of the letter were made available to journalists in Abuja.

It indicated that Yola had directed the EFCC to investigate the allegation against Lamorde and to forward the result of its investigation to him 'as soon as it is completed'.

The letter, with reference number DPPA/PET/EFCC/006/2008 reads, 'I refer to your letter dated September 28, 2015, in respect of the above mentioned subject matter.

'I am directed to inform you that your petition has been sent to the EFCC for its response to the allegation contained therein. The commission has been directed by the Solicitor-General of the Federation and Permanent Secretary to forward the result of its investigation as soon as it is completed.

'Accept please, the assurances of the highest regards of the Solicitor-General of the Federation and Permanent Secretary.'

It will be recalled that in the petition to the Senate, Uboh had alleged that Lamorde in March, 2013, diverted N779m out of the total N3bn forfeited by a former Inspector General of Police, Tafa Balogun, to the Federal Government

He also alleged that the EFCC boss conspired with some officials of the anti-graft agency to under-remit the ex-IG's forfeited funds of about N5.85bn into the Consolidated Revenue Account by holding back about N2.65bn.

But Lamorde had, on November 17, approached a Federal High Court, Abuja, seeking an order restraining security agents from arresting him.

According to court documents made available to journalists by Festus Keyamo, his lawyer, Lamorde also asked the court for an order setting aside all letters of invitation issued against him by the National Assembly to appear before it.

Joined in the suit are the Senate, the Senate Committee on Ethics, Privileges and Public Petitions, the Inspector-General of Police, and the Director-General, Department of State Services as first, second, third and fourth defendants respectively.

Lamorde, a police officer, was removed as the EFCC chairman on November 9, four years after he took over as head of the anti-graft agency.

The former EFCC boss had been replaced by Ibrahim Magu, an Assistant Commissioner of Police and a former Head of the Economic Governance Unit of the agency, who was appointed in acting capacity.

Meanwhile, the Chairman of the Senate Committee, Senator Samuel Anyanwu, told one of our correspondents on Sunday that his panel had not been served any court process, insisting that proceedings in the case would resume as soon as the Senate resumed in the second week of January.

Anyanwu added, 'We are still going ahead with our investigation as soon as we resume because there is no court process, to the best of my knowledge, stalling the investigation.

'We have not been served any court process. Lamorde's lawyers merely informed us that his client travelled out on medical grounds.'

The EFCC, in a statement in September by its spokesman, Mr. Wilson Uwujaren, said the petition contained a lot of falsehood.

Uwujaren had said, 'The Commission maintained a dignified silence over the past couple of weeks, not because it had anything to hide, but preferred to wait for the report of KPMG, the international audit firm, which it commissioned in June, 2014, to undertake a forensic audit of the record of exhibits and assets recovered by the commission since the creation of EFCC in 2003.

'The decision to commission KPMG for the audit was inspired, not by the fact that institutional memory had become an issue with the exit of most seconded staff over the years, but by a burning desire to benchmark its assets record keeping with best international standards.