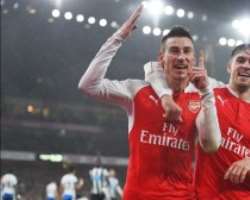 Arsenal surged clear at the top of the English Premier League Saturday thanks to a nervy 1-0 win over Newcastle United coupled with second placed Leicester City’s scoreless draw at home to Bournemouth.

Laurent Koscielny was the unlikely hero for Arsenal, scoring the only goal of the game deep into the second period at the Emirates Stadium.

But the Gunners were lucky to still be on level terms by the time the French defender struck.

Newcastle looked the better team for long spells, with Aleksander Mitrovic, Ayoze Perez and Georginio Wijnaldum all spurning good chances for the visitors. Aleksandar Mitrovic of Newcastle reacts to a missed chance against Arsenal.

Aleksandar Mitrovic of Newcastle reacts to a missed chance against Arsenal.

The loss sees Newcastle slip back into the relegation zone, although that was of little concern to Arsenal boss Arsene Wenger who’s side have now won three out of four games over England’s notoriously hectic festive period.

“It was hard work, but we prepared ourselves mentally,” Wenger told BBC Sport after the match.

“We were not at our best today, but over Christmas in four games we took nine points so we can look back and say we did 75% of our job.” Arsenal is now two points clear of Leicester which struggled to break down a resilient Bournemouth at the Kingpower Stadium in its Saturday fixture.

Riyad Mahrez’s penalty for the Premier League’s surprise package was saved by Artur Boruc after striker Jamie Vardy was felled in the box by Bournemouth’s Simon Francis on the hour mark.

Although Francis saw red for the infraction, Leicester failed to make its numerical advantage count in the remaining half hour. Fantastic Foxes: Why Leicester City is the Premier League&#39;s best

Why Leicester City is Premier League’s best team so far

Claudio Ranieri’s side is now without a win or a goal in its last three fixtures, but the Italian was content that his unheralded team has reached its season goal of notching 40 points (the tally usually required to avoid relegation) so early.

“A draw is not OK, it is only one point. But it is OK as we have 40 points, which was the goal,” Ranieri later told reporters. “It’s champagne for my players.”

“We have not scored for three games, but we have had chances. Sometimes everything is right, but now some things are wrong. The performance was good, a fantastic effort.” CNN