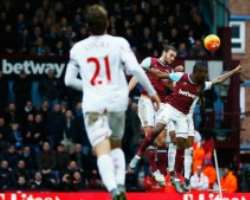 Andy Carroll marked his 150th Premier League appearance with a goal against his former club as West Ham United beat Liverpool 2-0 on Saturday.

Michail Antonio ‘s header gave the hosts an early lead at Upton Park before both sides hit the woodwork in an entertaining first half.

Carroll put West Ham in control with a typically towering header 10 minutes into the second period to leave Jurgen Klopp’s side a mountain to climb against the team who shocked them with a 3-0 win at Anfield in August.

Jordon Ibe fired inches wide of the far post after cutting in from the right as Liverpool started brightly, but it was the home side who struck first with just nine minutes played.

Enner Valencia curled a fine cross in from the right and Antonio beat Nathaniel Clyne at the back post to head past Simon Mignolet from close range, though Liverpool felt aggrieved that the West Ham winger was not penalised for fouling Alberto Moreno at the other end moments earlier.

Manuel Lanzini , who was forced off with injury shortly before the break, hit the post with a swerving effort that bamboozled Mignolet, but the Belgian responded and saved smartly from Aaron Cresswell ‘s deflected effort.

Liverpool finished the half on the front foot and went close when Emre Can rattled the crossbar from 18 yards out, but they were punished for some slack marking just 10 minutes after the interval.

Mark Noble was given time to swing in a deep cross from the right and Carroll arrived unmarked to rise above a helpless Clyne and power a header into the far corner.

Liverpool pushed for a lifeline but were almost caught on the break by Carroll, with Mignolet saving superbly from his close-range header before scrambling to keep out the rebound from Antonio.

Philippe Coutinho sliced through the defence only to be denied by the onrushing Adrian and Noble stabbed the ball off the line after Lucas steered a header towards the far corner as the pressure began to mount with a series of Liverpool corners.

But Joe Allen nodded a late chance wide as Slaven Bilic ‘s side remained disciplined in the closing stages, moving themselves two points above Liverpool in the Premier League table with their second win in a row.

- West Ham are now unbeaten in eight Premier League home games (W4 D4) and have not lost at the Boleyn Ground since August 22nd versus Bournemouth.

– West Ham have secured a league (home/away) double over Liverpool for the first time since 1963-64.

– The Reds have mustered just one goal in their last four Premier League away games.

– There were 41 shots (inc. blocked) in this match – only Leicester v Arsenal (43) in September has seen more in the Premier League this season.