Lionel Messi Says Barcelona Are Desperate To Win More In 2016 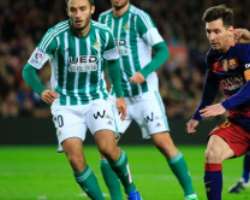 Four-time World Player of the Year Lionel Messi has warned Barcelona’s rivals that the European champions are determined to match their five-trophy haul from 2015 in the coming year.

Messi scored on his 500th appearance for the club as Barca rounded off the year in style with a 4-0 win over Real Betis to move back to the top of La Liga on Wednesday.

The Catalans lead Atletico Madrid on goal difference and Real Madrid by two points as well as having a game in hand on their rivals from the Spanish capital.

And having won the Champions League, La Liga, Copa del Rey, UEFA Super Cup and the Club World Cup in the past 12 months, Barca also set a new record of 180 goals in a calendar year.

“It has been a spectacular year and we wanted to finish it this way,” said Messi.

“It will be difficult to improve on what we have done, but we always try. We have a great squad that are desperate to continue winning.”

Barca were given a helping hand on their return to action after a shorter than normal 10-day winter break in Spain, though, as they were awarded a controversial penalty when Antonio Adan clashed with Messi after punching the ball to safety.

Neymar’s resulting spot-kick came off the bar, but Heiko Westermann turned the ball into his own net from the rebound and thereafter Barca were only denied an even greater rout by a series of fine saves by Adan and the woodwork.

A lovely one-two between Neymar and Messi allowed the latter to slot home his 425th Barca goal before a Luis Suarez double rounded off the scoring in the second-half.

“We just came back from the holidays so it is normal that the rhythm dips a bit and the games at the Club World Cup always take their toll,” added Messi.

“Possibly it wasn’t a great game, but we managed to do the most important thing which was to win and start another important period well.”

And Barca boss Luis Enrique echoed the sentiments of his star player as he focused on starting the new year with victory away to Espanyol in the Barcelona derby on Saturday.

“Firstly, I have to congratulate the players and the fans that get to enjoy this unique team,” he said of Barca’s achievements in his first full year in charge.

“The objective is to win again, to win the first game in 2016 and again be challenging to win titles throughout the season for this team, the fans and the club.

“We prepare for the new year with plenty of desire and excitement for the big games to arrive as quickly as possible. We need to try to maintain the same level as 2015.”