Sergio Aguero Could Play His First Full Match Since September 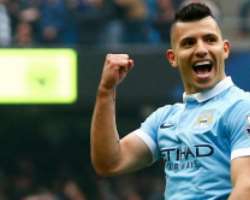 Sergio Aguero could play his first full match since September when Manchester City chase their first away win in seven games at Watford on Saturday.

Aguero has been eased back into action since suffering a heel injury against Southampton on November 28.

Last season’s top scorer in the Premier League returned for an hour against Arsenal, was rested for the Boxing Day visit of Sunderland and then played just over 60 minutes in the goalless draw at Leicester.

However, the Argentine often takes a few games to return to his goalscoring best following an injury lay-off.

City manager Manuel Pellegrini is aware of this, and knows the rewards are worth waiting for from a player who scored five against Newcastle in a stunning performance in October and plundered 31 goals from 42 appearances last season.

“As we know with Sergio, always when he comes back from an injury he needs three or four games to return to his normal performance,” said Pellegrini ahead of the Saturday Night Football clash with Watford.

“That’s why I never give him 90 minutes in a game. I think it’s better to play him for less minutes but with more intensity.

“But I am sure in the second part of the season we are going to see the real Sergio without injuries.”

Asked when Aguero might be ready to play a full game, Pellegrini said: “I hope on Saturday and he scores two or three goals.”

City’s other senior striker Wilfried Bony has struggled to impose himself in Aguero’s absences – which also include a spell out in autumn with a hamstring injury – and has been criticised by fans.

But the Ivorian, who has also been hampered by injuries and a bout of malaria since his £28m move from Swansea last January, is determined to turn the situation around.

Bony said: “Obviously I’ve had problems with injuries and I was ill, but this is football. For five years I haven’t been in this position, but sometimes you can’t control what’s happening. I just try to do my best every game. My hopes for 2016 are to be fit for the whole season and to win a trophy for City.”

Bony has scored in four of his last seven appearances, and has eight for the campaign, but has also spurned a host of other chances.

The 27-year-old said: “Scoring goals is most important for getting the confidence back. I know what I can do. Your first enemy is yourself so I just think about doing better and trying very hard to do my best in every game.”