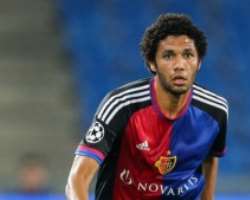 Arsenal are all set to complete one of the first signings of the January transfer window, as midfielder Mohamed Elneny has reportedly passed a medical with the Gunners.

Elneny, who's 23 and currently plays his club ball for Swiss powerhouse Basel, is  close to completing his move to the Emirates Stadium for a few of just under $11 million, according to reports . Elneny's move remains subject to the granting of a UK work permit, which should prove to be no problem for the 39-times capped Egyptian midfielder.

With midfield stalwarts Francis Coquelin (knee) and Santi Cazorla (knee) both out with long-term injuries, and Jack Wilshere still a long way from making his 2015-16 season debut, Elneny figures to go straight into an Arsenal first team making its first real Premier League title challenge since topping the league in 2003-04.

Elneny will, however, not be eligible to play for Arsenal in the knockout stage of the UEFA Champions League after making a number of appearances for Basel in this year's tournament.