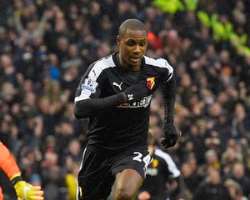 According to reports in England, the Madrid club have had their scouts watch Ighalo more than a couple of times this season.

Atletico are said to be ready to weigh in with a £12 million offer in a bid to prise away the Nigerian striker from Vicarage Road.

Scouts of Atletico have impressed it on the club’s manager Diego Simeone that Ighalo can solve their problem of a number nine and are keen to make a summer move for the 26-year-old.

However, Atletico will have to offload striker Jackson Martinez who joined from FC Porto to make room for Ighalo after the 29-year-old has failed to hit the ground running at the Madrid club this season.

Atletico are not the only club linked with a move for Ighalo as Italian side, AS Roma, are in the mix to land the Nigerian as well.

Last week, Watford manager, QuiqueSanchez Flores, had dismissed speculation that Ighalo and his strike partner, Troy Deeney, would be sold in January on the back of their impressive form this season in the Barclays Premier League.

“In meetings I have with the owner and the sporting director we never talk about the possibility of these players like Ighalo or Deeney leaving in the middle of the season,” said Flores.

Ighalo has settled in well in his first season in the English top-flight scoring 14 goals and weighed in with two assists.

Only Everton’s Romelu Lukaku and Leicester City striker Jamie Vardy have scored more goals than Ighalo in the BPL this season.