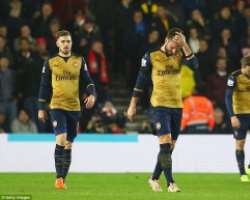 (Left to right) Aaron Ramsey, Olivier Giroud and Nacho Monreal walk back to the centre after watching Martina slam home the opener

Just when Arsenal’s old uncertainties seemed to have been banished, they came rushing back at St Mary’s on Boxing Day. Presented with the chance to go top of the Premier League against an out-of-form Southampton team, they blew it spectacularly.

Their war on their own insecurities had been going so well, too. Amid the anarchy that has reigned in England’s top flight this season, Arsenal have been the only one of the big four to radiate a sense of purpose and progress. That was scattered to the winds on the south coast.

When Leicester lost at Liverpool earlier in the day, Arsenal knew victory would take them to the summit of the division again but they were overwhelmed by a team that had been starting to look over its shoulder at the relegation zone. Southampton had not won since the beginning of November but Arsenal came to them gift-wrapped.

He had a point in all three instances although his observations ignored the fact that Southampton were the better side for the vast majority of the game. Southampton boss Ronald Koeman smiled wearily when he heard Wenger had cast doubt on the validity of the first three goals.

‘Only the first three?’ he asked, his voice dripping with sarcasm. ‘He didn’t say anything about the fourth? That’s strange. If you lose four-nil and talk about the referee, well, it’s not my way to analyse a football game.’

All had seemed set fair for Arsenal on Saturday night. They had beaten Manchester City last week and lost only one of their last 11 league games. There is a power vacuum in the Premier League and the fall from grace of Chelsea and Manchester United and the inconsistency afflicting City and Liverpool are collaborating to make this Arsenal’s best chance to win the title for 12 years.

The vulnerability of others is only half the story. Arsenal’s excellence is the other half. The tone for their improvement has been set by the sublime Mesut Ozil, who has been at the heart of so much that is good about the Gunners, providing 15 assists and making analysts purr with his vision, awareness and weight of pass.

It is a sign of the stability and maturity that is running through the club now that Arsenal went into Saturday’s game with a line-up unchanged from the one that started in the victory over City at the Emirates last Monday and they should have opened the scoring in the second minute when Ozil delivered an outswinging corner that found Giroud unmarked ten yards out but he headed high over the bar.

Arsenal looked the more composed side in the opening minutes but they gradually surrendered the momentum to Southampton, who started to grow in confidence and aggression.

Ozil was careless in possession and operating at the margins compared to recent weeks and midway through the half, Southampton took the lead.

Mertesacker only half cleared a cross from the Southampton left and, as it rolled to Cuco Martina, the rest of the Arsenal defence ambled out to close the ball down without any sense of urgency. Martina had time to set himself and he responded by curling a sumptuous shot beyond Cech with the outside of his right boot from 25 yards.

Arsenal staggered. Mertesacker gave the ball away on the edge of his own area and nearly gifted Southampton a second and Koscielny did his best to tee up first Long and then Ward-Prowse within the space of a few seconds. Neither could take the opportunity.

Southampton nearly punished Arsenal for their profligacy two minutes later when Wanyama lobbed a ball over the top and Long raced away from Mertesacker. As Cech came out, Long lifted the ball over him but well over the bar, too.

But Long was brilliant. He harried Koscielny and Mertesacker out of their stride and made them look slow, old and clumsy. The next time he got a chance, he took it.

Walcott gave the ball away carelessly, deep in Arsenal’s half and Southampton broke at lightning speed. Long played the ball wide to Mane and then went for the return, tangling with Koscielny and appearing to trip him in the process. Mane’s return ball was inch perfect and Long swept it past Cech. It would be nice to say that Arsenal mounted a fightback, that they threw everything at Southampton in a bid to reduce the deficit. It didn’t happen. They looked tired and disinterested. They rarely threatened. Their passing was loose and shoddy.

And they got what was coming to them 20 minutes from the end when Fonte powered in a near post header from a corner.

Deep into injury time, Long got the second goal he deserved, rifling his shot past Cech. If anything, losing 4-0 flattered Arsenal.

They were not just beaten. They were humiliated.
Mail