Guus Hiddink Wants Eden Hazard To ‘get His Ego Back’ 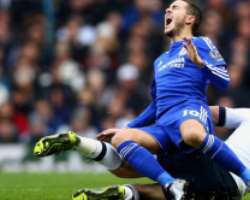 After being named interim manager at Stamford Bridge, Hiddink has prioritised restoring the confidence shattered by nine Premier League defeats in the current campaign, and Jose Mourinho’s departure.

The 69-year-old wants Chelsea to locate the strutting self-assurance that underscored last season’s league title charge, to guide the Blues away from relegation conflict.

Hazard faced fierce criticism for his performances this season, with some Chelsea fans making a banner describing him, Diego Costa and Cesc Fabregas as “rats” in the aftermath of the Mourinho sacking.

But the Belgian could overcome hip trouble and be selected for the home game against Watford on Boxing Day, with Hiddink intent on helping the 24-year-old hit back to his best after a miserable opening to the new campaign.

“He had a terrific season last year and it’s also normal you can have a setback after that,” said Hiddink.

“But I think he can be a key player again.”

Hazard proved an unwitting participant in Dr Eva Carneiro’s Chelsea exit in September. Blues medic Carneiro was branded “naive” for rushing onto the field to treat the Belgium star in Chelsea’s 2-2 draw with Swansea on August 8.

One of Chelsea’s most potent and creative attacking forces last term, Hazard has been a shadow of his former self – but Hiddink vowed to restore the ex-Lille star to former glories.

“He is a key player as captain of the national team in Belgium – but also here when he gets back into shape.

“He was unlucky to be injured recently, which was another setback.

“We need to get the ego back for him to perform.”