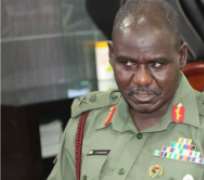 SAN FRANCISCO, December 26, (THEWILL) – Barely five days to the expiration of the deadline given for the defeat of Boko Haram terrorists, the Chief of Army Staff, COAS, Lt. Gen. Tukur Buratai, has asserted that the terrorists “can no longer coordinate any attacks”, assuring residents of the North-east that 2016 will be a more peaceful year for them.

Buratai, who gave this assurance on Thursday after his operational visits to troops locations in parts of Borno and Yobe states, said within the time frame given by President Muhammadu Buhari, joint forces had decimated Boko Haram and substantially destroyed its enclaves on Nigerian territory.

His words, “Going by the present pace and momentum of the military operation, no insurgent or group will be able operate freely by 2016.

“Since Mr President's mandate, we have done a lot to defeat these criminals; we have degraded them in such a manner that they can no longer hold any ground in our country.”

“They can no longer coordinate any attacks; we will, in the coming few days, completely close in on them, so the outlook for 2016 is bright. I want to assure Nigerians, especially the Northeast, that 2016 will be more peaceful.”

The COAS assured that the military would consolidate on the successes recorded in the operations so far, stressing that there would be no room for the insurgents to operate henceforth.

While conveying President Muhammadu Buhari's congratulatory message to the troops for meeting the deadline, he said that the President was pleased with the successes recorded, especially in meeting the timeline in fighting insurgency. But he urged them not to be complacent, saying the insurgents would employ desperate measures to survive the onslaught by the military.

At the base of 21 Brigade deployed from Damaturu to Buni Yadi, Buratai commended the soldiers for their efforts in curbing the activities of the insurgents in the area.

He urged the troops to remain alert and make good use of available equipment for the operations.

The army chief reiterated the commitment of the army and other relevant authorities to providing the necessary logistics to enable troops sustain the momentum.

Buratai, who held durbars in all the locations visited, also addressed issues raised by soldiers and officers. They had expressed their desire to end the counter-insurgency operations and return home as soon as possible.