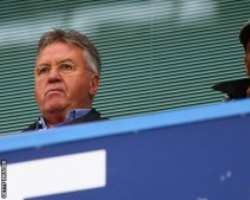 Chelsea are in talks with Major League Soccer franchise Montreal Impact over the future of striker Didier Drogba.

Montreal say Drogba has expressed a “desire to help” his old club.

“We understand his attachment, but our objective is to have him back for another season,” Montreal tweeted.

Drogba, 37, who signed for Montreal in July, watched Chelsea’s win over Sunderland on Saturday with interim manager Guus Hiddink and owner Roman Abramovich.

Hiddink on Wednesday refused to be drawn on whether Drogba would join his backroom staff.

“I worked with him five or six years ago and I was delighted to have such a professional in the squad,” the Dutchman said.

“He’s a legend already in this club. The only thing is at the moment is that he’s playing in Montreal.

“The official process I don’t know but I spoke openly from the bottom of my heart that huge impact players can be key for the club.”

The Ivorian spent nine years at Stamford Bridge in two spells, first representing the club between 2004 and 2012 before rejoining them last season.

Montreal say it was agreed in Drogba’s contract that he would have a second season in Canada.

“We are doing everything we can to have him back with the Impact in 2016,” the club said.

“We are willing to accommodate him. This situation is out of our control.”

Defending Premier League champions Chelsea have endured a terrible start to the season, losing nine of their 17 games to slip to 15th, and last week sacked manager Jose Mourinho.