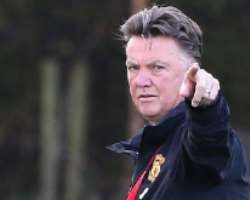 Louis van Gaal says Manchester United can change their fortunes around but must make an “immediate improvement”.

The under-pressure United boss walked out of a news conference after less than five minutes on Wednesday.

United have gone six games without a win – including three successive losses – and Van Gaal said he is experiencing his worst period at Old Trafford.

He added: “There’s no disguising the fact we’re in a very bad period. Things must begin to improve immediately.”

Van Gaal was writing in the United match programme for the 28 December encounter with Chelsea, whose former manager Jose Mourinho has been linked with his job.

“We can turn this situation around. The best way to come out of this period and improve is for us all to stick together,” he said.

Captain Wayne Rooney insists the team are behind Van Gaal, despite their longest run without a win since 1998.

“We’re fighting for the manager and trying to get results to turn this around,” Rooney, 30, told Sky Sports.

“You have a lot of people talking about things they believe are happening when in reality the people writing that stuff don’t know anything that’s happening.”

The 64-year-old Dutchman asked reporters if any of them wanted to apologise to him and said speculation about his future had affected his family.

England striker Rooney, who has two Premier League goals this season, said: “We all have families and sometimes things get written, which is not nice for your family to see.”

“It’s tough but it’s part of football and part of being a footballer.”

“It’s not nice when you’re getting criticism every week. It’s tough for the players to deal with. We hurt. We’re proud people and proud to play for Manchester United.”

Low on confidence?
The Red Devils have not won any of their last four league games and are fifth in the table, nine points behind leaders Leicester City.

They were booed off the pitch by supporters in Saturday’s 2-1 loss to Norwich and fans have called for Van Gaal to adopt a more attacking style of play.

“As a group of players we know we can do better. We regularly have meetings with the players and with the manager,” said England captain Rooney.

“I know my own performances can be better. I’m working hard to try and improve that.”

“We haven’t won games the last few weeks and it’s normal confidence will be a bit low – we need to lift it.”