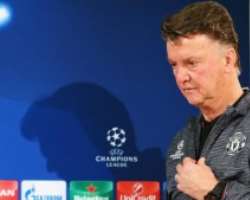 Louis Van Gaal is not a happy man and went on an incredible pre-Christmas rant.

Speaking for just four minutes and 58 seconds in his pre-match press conference ahead of Manchester United's trip to Stoke City on Boxing Day (Watch live, 7:45 a.m. ET on NBCSN and online via Live Extra ) the Dutch coach was asked about reports claiming he would be fired by the Red Devils following two-straight defeats and no win in their last six games as they've dropped out of the top four.

Van Gaal, 64, claimed that he only turned up to speak to journalists so he didn't break Premier League rules and he attacked them as reports continue to circle that former Chelsea boss Jose Mourinho is being lined up to replace LVG at Old Trafford.

“Do you think that I want to talk to the media?” Van Gaal asked. “I am here only because of the Premier League rules. I have to talk with you. I can only see that when I say something that you use my words in your context. I want to say that I have tried to lift the confidence of my players. I have done everything this week with the players, my members of the staff, I held a Christmas lunch, I have held a speech and I feel the warmth and the support of everybody in Carrington, this Aon training complex.

“I didn't feel that in the media. Of course I can imagine you can write about that subject, we are not in a good position but four weeks ago we were first in the Premier League and in about four weeks we can be again back in that position.”

Pushed further by the media, LVG then got up and walked out of the press conference. The Dutchman had this final message to the media in a tense atmosphere.

“I wish you a merry Christmas and also maybe a happy new year when I see you,” Van Gaal said. “Enjoy the wine and a mince pie. Goodbye.”

“Has anybody in this room not a feeling to apologize to me? That's what I'm wondering,” Van Gaal said to the assembled media.

Cue silence from the reporters and then one brave soul asked: “What have we done wrong?”

“I think I was already sacked, I have read… I have been sacked. My colleague [replacement] was here already,” Van Gaal replied. “What do you think that happens with my wife or with my kids or with my grandchildren or with the fans of Manchester United or my friends? What do you think? They have called me a lot of times and also Arsene Wenger is saying something about that.”

Van Gaal had plenty to say about the media and also claimed they had fabricated rumors that he was to be fired. The former Netherlands, Bayern Munich, Ajax and Barcelona coach also claimed he has received calls of support from Sir Alex Ferguson and United's executive vice-chairman Ed Woodward and questioned the media for not reporting the facts.

Although some of that may be true, what can't be fabricated is United's lackluster performances in attack and a dip in form in recent weeks which has seen them crash out of the UEFA Champions League at the group stage and slip down the table in the Premier League.

The pressure of back-to-back defeats to newly promoted teams — Norwich City last Saturday and Bournemouth two weeks ago — for LVG's expensively assembled side appears to be getting to the manager.