Henry faults Van Gaal over use of Martial 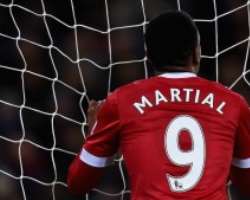 After scoring four goals in his first four appearances for Manchester United, Anthony Martial has scored just two in his past 11 games.

Martial, a €50million signing from Monaco in the off-season, had gone nine games without a goal in the Premier League before Saturday’s 2-1 loss at home to Norwich City .

The France international has often been played out wide under Van Gaal, but Henry believes the 20-year-old should always be the focal point of United’s attack.

Referring to Martial’s touch map against Norwich, Henry said on Sky Sports: “What are you doing here? I actually do not know what he is doing there.

“He should be there [in the penalty area], having a one versus one, scoring and celebrating. Is it fear? Is it because they have been brainwashed a bit too much? I just don’t get it.

“I think if I had a player like that, he would be my No 9 and the rest are around him.”

“The interesting thing is that’s the instruction from Van Gaal, to stay wide,” the former Liverpool defender said.

“Let’s not forget, he is a centre forward slash winger, so normally you would be expect him to make those runs inside.

“But he’s had so much instruction now, that he has stayed out wide. That touch map is from a [Jesus] Navas of Man City, someone who hugs the touchline, tries to beat the full back and put a cross in.

“You see how many touches he has had? Not one touch in the box, and just the one cross. So he’s not even pulling wide and doing damage.

“And that all comes from the instruction of the manager, and why Man United never look like scoring in the game.”