Pedro backs Fabregas to recover after boos from Chelsea fans 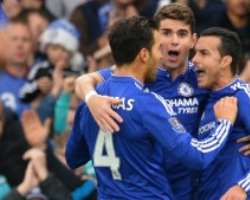 Pedro acknowledges that boos from the Chelsea fans would have been tough for Cesc Fabregas to cope with.

Chelsea attacker Pedro is confident Cesc Fabregas can overcome a “difficult” day at Stamford Bridge after he was booed by his own supporters against Sunderland on Saturday.

The midfielder’s name – along with that of Diego Costa – was jeered by home fans ahead of the 3-1 Premier League win over Sunderland, which was the first game following Jose Mourinho’s departure.

Costa, Fabregas and Eden Hazard were also named as “three rats” in a crowd banner that appeared to suggest the trio were responsible for Mourinho’s exit.

Pedro, who scored in the victory, also played with Fabregas at Barcelona and thinks his team-mate has the mental strength to come through a tough period.

“It was difficult for him, but he can get through this,” the 28-year-old told The Standard.

“He is strong mentally and very competitive. Cesc is a top player, a very good character in the team, he is a winner and it is good he plays for us.

“I understand why the fans are so upset. It is normal when the team and coach are in this position. It was certainly difficult for the players, but it was an important win.

“The supporters have been good to us this season. They have always been with us, together. I don’t say anything against them, they are part of us.”

Pedro revealed that the whole squad have found it hard to cope with the departure of Mourinho.

He said: “Jose Mourinho is a very good coach. It is a difficult situation for everyone.”