Why Omeri Must Not Contaminate The Change Agenda 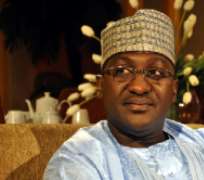 On March 23, 2011, Mike Omeri was fired as the Director of Research and Strategy of the Goodluck/Sambo 2011 campaign. At that time, the development was hailed as one of the few things the then President Goodluck Jonathan got right given Omeri's cantankerous bend of mind. Sadly, however, the same man who was not good enough to do the dirty job that working in a campaign organisation entails was appointed to run the most sensitive facet of branding Nigeria's image as the Director General of the National Orientation Agency (NOA). Over four years down the line, one does not need a scientific review to certify that this character ranks high among the disasters that has befallen the nation in terms of deficit of leadership.

First is the fact that Omeri lacks the rectitude to even contemplate the task of genuinely rebranding Nigeria. A man who in 2011 authored the now infamous “rigging manual” to secure victory for the PDP at any cost has no business laying claim to packaging Nigeria or re-orienting citizens to birth a greater nation. What he did for the duration of his tenure was to render NOA into a mouthpiece of his political party as opposed to serving national interest.

A clear indication of this is the “Do the Right Thing: Transform Nigeria “campaign launched under Omeri's watch at NOA. The campaign became a joke and a fraud at the same time. Its implementation was mostly farcical to the extent that Omeri, as the chief priest of the voodoo campaign apparently only had the installed capacity for doing the wrong things. The fraud component of the campaign was that it was chiefly used to loot public treasury and in the run up to the 2015 general elections it was used as a cover to finance PDP messages in the guise of public enlightenment messages.

The wrong things done by Omeri as the DG of NOA included brazenly becoming the symbol of corruption when his mandate morally included sensitizing citizens to shun the anti-nation building scourge. He was involved in the diversion of over N180 million and other funds meant for sensitization programmes during the 2015 Elections. Omeri actively obstructed the floating of NOA Radio Projects just as he diverted media and other consultancy services to a media firm he owns. For a man who preached transforming Nigeria, the NOA DG covered for two directors of the agency, Mr. Dogo David and Mr Bonat Tagyai to allow them continue in office while drawing salaries even though their tenures had expired. How then can Nigeria be transformed with this level of brigandage in high places. But all these pale in comparison to the other sordid pies he had his hands in.

Omeri's most satanic outing was to be in his capacity as the coordinator of the National Information Centre, which provided information on how the country was fighting the Boko Haram insurgency and other security challenges. For the way he danced on the graves of terrorism victims in the course of peddling his lies, God alone can judge him; but it behoves Nigerians to make him and his gang members visible to the Creator.

Local and international media were awash with his claims of how the Jonathan government has secretly procured new weapons to combat insurgency. It was this excuse of secretly procured weapons that he used to explain the presence of South African mercenaries on our soil. “When our weapons were acquired recently, we needed training because training component came with the people who supplied these weapons”, was one the justifications he gave at that time. Omeri was also an arrowhead in the conspiracy that made the general elections to be shifted by six weeks, he actively defended this position even when it almost precipitated countrywide crisis. All these patently contrary to the mandate of the NOA going by the extant law.

But Dasukigate has made us wiser. There were no arms purchased. All the hypes about boosting the morale of our troops were nothing but the chanting of death wish for the gallant ones. The only thing done with the arms money was creating a ready ATM for a blood drunk cabal that placed the greed for filthy lucre far above human lives and national security. For all we now know, and on the strength of revelations that funds collected in the name of arms purchase ended up in bank accounts of girlfriends, this circuit actively turned the Boko Haram insurgency into a lucrative industry and like the Nerō Claudius Caesar, played the fiddle while the country burned. Painfully, unlike Nero, they had no plans for rebuilding anything. They made the crisis simmer to create excuses to erode constitutionally guaranteed rights and to stifle opposition.

It is therefore cofounding that a man with this sickening trail of seditious betrayal is still able to work up the temerity to continue staying on in office even when the band of cutthroats he flocked with have since been booted out through popular revolt at the ballots. He has been hopping from one chieftain of the ruling All Progressives Congress (APC) to the other in the delusionary expectation of being able to stay on indefinitely or to secure another term as the DG of NOA.

No one should be deceived. President Muhammadu Buhari, those who have his ears and the APC thus owe it to Nigerians not to allow Mike Omeri to contaminate the Change Agenda. Nigerians shed blood and sweat to sack the corrupt regime to which Omeri belongs and citizens are still defending the change they asked for with their daily sacrifices. They must therefore not be insulted by the 'retainership' of one of the men that made their lives a waking hell. The mistake must not be made that it is okay to act with impunity while in office and that all that is needed is to 'port' political parties and qualify to join the new government. This character must be shown the way out since he has demonstrated ample capacity to not only corrupt others but to subvert national interest.

The mere fact that Omeri is still the DG of NOA shows that this administration is not committed to tearing down the “high places” erected by its predecessor. The argument that he is a tenured appointee does not hold here. He waved the credential to be so treated when he had no qualms with being included on the Jonathan Presidential Campaign Organisation as a member of the Media and Publicity sub-committee. This is contrary to the clear provisions in Part 2, Section 6 (2) of the National Orientation Agency Act that the Director General of NOA should be “non-partisan”. The implications of bringing such partisan meddlesomeness into an agency that should mobilise the general public to have faith in government and in a country that practices multiparty democracy were not Omeri's concern. He only started trying to distance himself from what was then described as “gross violation and impunity” sometime in October, nine months after he should have rejected his inclusion. This is after the fact.

Something that should worry the present government is that by virtue of the position he continues to enjoy, Omeri has daily access to sensitive information on how the fight against Boko Haram is being prosecuted. This is very dangerous considering that this man was part of a group that earlier allowed the crisis to snowball to shore up whatever interest it was they had. The snake has been wounded but not killed and has become more dangerous. The group Omeri operated with is still out there to advance whatever this interest was; and having him in place provides them a mole that exposes the underbelly of the government and the military. This is enough reason to fire him right away to prevent him from sabotaging the government.

Beyond stopping Omeri from sabotaging the government or contaminating the Change Agenda, he must, like his co-travellers, answer for his misdeeds in office. In his own case, it goes beyond being investigated for his roles in the arms deal, if any, he must also shed light on the intricate web of deceptions that was spun to mislead Nigerians as to the true state of affairs with the fight against.

Written by Jonah Datti, Head of Operations, Stand up for Nigeria Coalition.