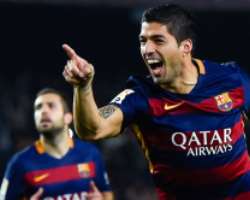 Luis Suarez warned his Barcelona side to stay focused for the rest of the season after firing the Catalans to Club World Cup glory over River Plate.

The Uruguayan scored twice in the second half in the 3-0 victory in Yokohama, after Lionel Messi had broken the deadlock before the break, finishing the tournament as top scorer with five goals, with his brace against River adding to the hat-trick he netted against Guangzhou Evergrande in the semi-final.

Capturing the Club World Cup caps a superb year for Suarez and Barcelona, who lifted five trophies in 2015, including the Spanish Primera Division, the Copa del Rey, the UEFA Super Cup and the Champions League.

But the striker urged his side to learn from the mistakes of last year’s world champions Real Madrid, who failed to collect any more trophies in 2015.

“After a competition like this there are always teams that drop off and enter into a bad run, so we must keep going,” Suarez told Telecinco.

“The most important thing was winning the trophy, which is what everyone wanted to do.

“You have to try and help with goals and I was able to do that this time so I’m also happy about that.”

The double helped Suarez draw level as top scorer in Club World Cup history with Messi and Cesar Delgado, and had a special word for Messi, who overcame a groin injury and abdominal pain respectively to play in the final after missing the semi-final against Guangzhou Evergrande.

“We have to highlight the sacrifice that Messi made in order to play today,” Suarez added.

“He and Neymar wanted to play the game at any cost, but we should also remember the sacrifice the entire group has made this year. We are the best team in the world.”