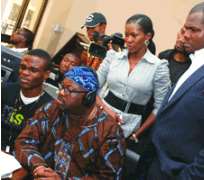 Goal-getting Linus Idahosa, the cerebral head honcho of Del-York international has sensationally revealed that it was the combined efforts of his company, 36 professionals from the New York Film Academy (NYFA), 400 students and five weeks of intensive training was what helped to make the just-ended programme unique and highly successful.

The well-applauded programme was brought to Nigeria by Del-York international to gather a fresh crop of youths that will take the Nigerian film industry, Nollywood, to its deserved position in the world of film making soon.

The training was the first of its kind on the African continent, drawing participants from countries like: Malaysia, Dubai, Accra and Nigeria. It recorded a harvest of young, fresh and certified digital film producers, 3d animators, screen and script writers, producers, cinematographers and the long reel of professionals that make a world class film industry.

The night that marked the closing of the one month training was just like a big family reunion. The 36 instructors, Mr. Idahosa, Executive Director, Stephanie Okereke and the 400 students, which included a disabled said to be the best editing student, gathered at the Silverbird Galleria in abuja to screen the short films done over the one month training period. Short movies, musicals and animations produced by the students were the highlights of the memorable night.

Tutoring the youths was an experience, which the trainers from the New York Film Academy found more than worth their while. The acceptance, the passion of the students and their thirst for excellence was unrivalled and thoroughly appreciated by the trainers who for the most part anticipate a repeat of the journey. In the words of one of the trainers, Shawn Kinney, the experience was awesome!

The students with certificates in their hands, all seem eager to storm Nollywood with their new professional tickets but not without the right foothold, said the mastermind behind the training in Nigeria, Mr. Idahosa.
“Three hundred and seventy out of these four hundred students were from the Niger Delta region, some were even ex-militants.

This training makes them professionals in 3D animation, digital and linear editing, film production, cinematography, script and screen writing, acting and lots more and they need equipment and tools to work with. Some of these 3D animators need computers to work with. Someone has to support them so that they put their new skills to good use”, he explained.

Mr. Idahosa whose dream to empower Nigerian youths is legendary added with strong emphasis that the training was, “a strong instrument for the amnesty programme of the federal government, a practical way of engaging the youths gainfully and positively, drawing them away from the attachment to the oil and gas industry and militancy.

The corporate bodies, the banks and their likes talk about corporate social responsibility; this is the time to be pragmatic. Most of these youths need support from here, as this training has transformed many lives. We have them all in our database and we plan to follow their progress to ensure they are on track,” he added.

Mr Idahosa appreciated to the fullest, the support by Rotimi Amaechi, the Rivers State Governor who sponsored 120 students as well as the NDDC that brought 250 participants on board the training, “but more needs to be done and must be done,” he posited.

Story by By Azuh Amatus