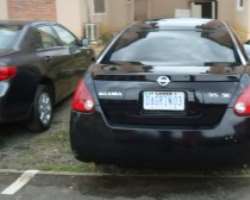 The hip hop act, who had been underground for years, before finding favour with fans last year, had his car – a black Nissan Maxima- damaged yesterday while driving to Surulere (in Lagos) with his friends, after a careless truck driver ran into him and tore off his car fender. They were returning from Ikeja.

There was a brief argument, multiple sources tell NFC; but no one was injured – and no punches were thrown.

Here's a picture of the car Dagrin was driving.

The rapper has been unreachable, and repeated attempts at getting him to comment proved abortive. 'The calls were getting too much, so he had to put off his phone', one of his close friends who was in the car with him told us.

The source says the truck driver has agreed to be responsible for the damages; but we are unable to confirm this from Dagrin or a rep.