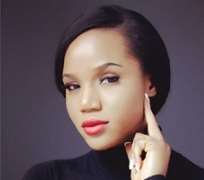 Controversial gospel Nigerian singer, Caroline Sam, better known as Maheeda, precisely in October 2014, announced that she had acquired a land in the Northern part of the Netherlands and further disclosed that she was planning to build her home.

Well, the soft p*rn star has finally completed the project and has started moving her belongings into the apartment.

Maheeda was very elated to have finished the house, which was designed and made of glass.