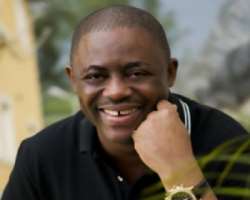 Femi Fani-Kayode is a tormented soul. His recent change of name, from Femi Fani-Kayode to David Oluwafemi Olukayode has done nothing to exorcise the demons that perpetually torment him; ready proof is that the nation continues to recognize him by the moniker from his first iteration - FFK.

A cursory study of his face reveals that much. His eyes poignantly display the anguish smouldering within him and showcased in a mournful and pained look that tells you their owner would have preferred a different fate from his present lot. His mouth tells no cheerier story, the crookedness of his upturned upper lip tells of a mouth long soured by a contaminated silver spoon. But whatever demons torment FFK, should this cantankerous character get our understanding and pity given the fact that he persistently relish in making himself odious?

Whatever decision is to be reached on whether we help exorcize FFK’s demons or we turn and feather him is dependent on the prognosis we make from what understanding we have of him. This should not be a difficult task given the fact that the former President Olusegun Obasanjo who created this current mutation of FFK by appointing him as a minister has summed it all up: "Femi Fani Kayode is my boy. Provide him food, he will eat and then sing for you. He's a smart boy." That was what Obasanjo had to say about the monster he unwittingly unleashed on the nation.

A little digression is necessary here. Food is essential to the human body, which breaks it down into glucose and the various nutrients needed to sustain life. Anyone who has not eaten for a prolonged time will suffer a crash or drop in blood glucose level, which is referred to hypoglycemia. There are tons of literature on the relationship between hypoglycemia and psychosis and they should make an interesting reading for people who only sing after they are provided food.

Could it then be that FFK suffers hunger induced psychosis whenever he is not provided food? Food he can only get by hitching rides on the train of any government in power.

A look at his recent history may come in handy here. Prior to being rehabilitated with the appointment as Special Assistant on Public Affairs and later minister under the Obasanjo government, FFK had that now famous sojourn to Ghana - he admitted that much before the Senate during his ministerial screening. Could it be that the sojourn was necessitated by the bout of hunger that came after he squandered away the inheritance from daddy? Only FFK can answer that. But the truism of the saying that one cannot talk with a mouthful of food, was established in FFK when his tongue lost most of its venom while he dined at Obasanjo’s table.

Soon after the Obasanjo government ran its tenure, FFK was again left hungry and wasted no time in launching serial attacks on the Yar’Adua government which transited before FFK could be appeased. Still hungry, he promptly mobilized against the Jonathan administration, until the issue of his hunger was subsequently addressed. Of course, some of this was coupled with the ‘Sword of Damocles’ hanging over his head in the form of his arraignment and trial for fraud by the Economic and Financial Crimes Commission (EFCC). While he sustained his attacks on President Jonathan, he was satisfied with the crumbs that fell off the meagre table of the then opposition leaders. But that was for a short season. A few visits to the Villa later, FFK was again at the table. This time the ruling party’s table, getting his fix of food and true to Baba Iyabo’s theory, he began to sing and eventually cornered the position of Director of Publicity for the Goodluck Jonathan Presidential Campaign.

Given the revelations we are now receiving on how the Central Bank of Nigeria (CBN) was converted to the PDP campaign ATM, one can only imagine how much food went down FFK’s gullet considering that someone got as much as N4.6 billion for spiritual software. The closest inkling to what he made from that campaign was the swift swing from hypoglycemia psychosis to hyperglycemia manic episodes that saw him unleash his verbiage even upon those who did not cross his path.

It has been barely eight months since our gentleman stuffed his stomach and pockets full from illegally sourced campaign funds, and it seems - like the prodigal son he has always been, FFK is already showing signs of hunger again if his recent umbrage at the incumbent government is any indication. He has started the attacks that he hopes will secure him access to the corridors of power and the inevitable invitation to join the meal at the table - only that the stance of the present government portends that it is not ‘come one, come all’ affair. The government which FFK served had ensured that the pantry and the kitchen were cleaned out and left bereft of even crumbs. The days of ‘Girls of Playboy’s Mansion’ kind of Villa party is over. Certainly, Nigerians are now familiar with this perpetual circle: FFK attacks a government, he gets invited to be part of that government, and next the turncoat becomes abusive of the opposition and any anyone who dares criticise that government.

The present government must thus get its Change Agenda right particularly with Femi Fani – Kayode and his ilk. The starving big boy is apparently back on the street plying his wares as he seeks another round of bailout for food so that his tantrums can metamorphose into singing and possibly some dance steps thrown in for good measure. It must contain FFK like the contaminant that he is.

FFK has begun unwarranted attacks on President Muhammadu Buhari’s government only that this time around something is different. His psychosis is now driven by more than hunger. Paranoia and morbid fear are part of the driving force for the new round of attacks; and we must sympathise with Femi Fani - Kayode because the demons haunting him are real and not in the realm of conjecture. His demons are in the shape and form of the mind boggling revelations about the satanic and murderous plunder of Nigeria by the administration FFK furtively tried to keep in office. The revelations included how funds appropriated for other sectors were channeled to a campaign organisation for which FFK was the poster boy. For instance, the erstwhile National Security Adviser, (rtd) Col Sambo Dasuki turned the CBN inside out to create a slush fund for the PDP campaign. Considering that a large chunk of the party’s campaign expenses went into media and publicity, the wing overseen by FFK during electioneering, it is a matter of time before the testimonies of all those presently in detention over the fraud point back at him.

Incidentally, attacking the government to earn invitation to a ceasefire is another area in which the character is well versed. Such profiteering campaign of calumny is his signature move and did bring him reprieve under the immediate past administration when scores of charges against him were progressively dropped until he was discharged by the court. Nigerians still recoil in horrifying amazement at the ease with which FFK made a volte face and became a GEJ piper shortly after referring to him as, "a president who has abdicated his responsibilities, destroyed his own political party, divided his own country...abandoned his own people, brought ridicule to his own faith...and broke his solemn oath to protect and defend the Nigerian people". To FFK, integrity is an archaic and moribund oxymoron. He recants at will and whenever it’s expedient for his stomach. Hence, he has nothing to lose by launching new rounds of attacks on the incumbent government when it is obvious that his role in looting the country to fuel the PDP campaign will soon bring him before the Lady Justice. This threat of having his day in court and the reality of an impending hunger are FFK’s demons from which no mean exorcist might save him.

It has been written that most demonic possessions can be very violent and can completely damage the psyche of an individual leaving the victims tortured, trapped and extremely helpless. Yet, FFK is a Nigerian and even as we are in a dilemma as to what to do with him. We cannot, even for the sake of his ancestors, abandon him to his certain fate. So what do we do with FFK? It is our responsibility, as tradition demands we do to a naked lunatic by covering his nudity, to help this drowning soul by exorcising his demons. We can all do this by ignoring his tantrums, antics, whether in the mainstream, online or new media. For those who cannot resist the temptation to feed his ego, they can at least be kind enough to be truthful to this tormented soul by dredging up the facts of sordid past to shock him from his hallucination bouts. The government of the day must also show some tough affection and kindness to not just FFK but also to Nigerians by making sure the law takes its course when it does catch up with those who looted the country. As with medieval exorcism, sometimes it must be needful to ‘bleed’ the possessed to let out the bad that has contaminated his soul for too long.

Agbese is a public affairs commentator based in the United Kingdom.