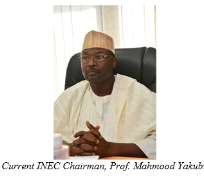 Another set of elections have come and gone. The same problems and symptoms have emerged.

It is unnerving that at this stage in our development, we still cannot get our elections right. It is obvious that the people in authority do not want free, fair and credible elections. We have undergone biometric voter’s registration exercise and Permanent Voters Card (PVC) verification through Smart Card Readers (SCR). Nigerians are not too dumb to utilize electronic voting.

I have continuously touted the benefits of electronic voting, especially in my two previous articles (ELECTRONIC VOTING AS PANACEA TO RIGGING and REVISITING ELECTRONIC VOTING).

Kogi State supplementary elections and Bayelsa State governorship elections were held this past weekend. Smart card readers failed again and there were incidences of election violence.

According to news reports at the time of filing this column, thugs disrupted voting in Anyigba at Eti Aja 2 - Dekina LGA in Kogi State. Apparently, thugs stormed some of the polling units in the area, shooting sporadically into air shortly after accreditation, but normalcy was returned to the polling units by security agents only for the thugs to appear again and chased the voters on queue away, disrupting the entire voting arena. Independent national Electoral Commission (INEC) ad hoc staff and prospective voters ran away for their safety. Clearly, the results from those units should be cancelled if the story is substantiated. It is alleged that the candidate of the All Progressives Congress (APC), Alh. Yahaya Bello was in early lead against the incumbent governor and People’s Democratic Party (PDP) candidate, Capt Idris Wada.

In Bayelsa State, the story is not much different as it relates to election violence and failure of the card readers. The only additional factor in Bayelsa is that there appears to be voter apathy. My Bayelsa brothers may feel the result is pre-determined from the Oga at the top (nationally). Interestingly, the Bayelsa election puts the immediate past PDP governor of the State Timipre Sylva (now in APC) against the current governor and PDP candidate, Seriake Dickson. The venom and animosity between the two is only matched by the desire for vengeance by the one who feels unjustly kicked out. The results were still too close to call by Sunday evening.

Once again, any Nigerian that engages in election violence, including ballot box snatching should be subjected to the death penalty, if not just for the impunity, but also for the stupidity. Edo State governorship elections, Anambra State elections and other States will come before the big one in 2019. INEC and security forces must get their act together. We are all tired of the same problems repeating themselves.

The current INEC chairman Prof. Mahmood Yakubu who took over from the acting Chairman Hajia Amina Bala Zakari on Monday, November 9th, 2015 has enough seasoned staff and the process is neither new nor is it rocket science. Also, before handing over, Amina Zakari assured Nigerians ”that INEC will use the opportunity presented by forthcoming Kogi and Bayelsa governorship elections to continue to display its improved processes and rigour” and “ that the Commission was raising the bar during the Kogi and Bayelsa outings.” We are worried about the “stand alone governorship elections in Anambra, Ekiti and Osun states, and the General Elections”. See INEC WILL USE KOGI AND BAYELSA GOVERNORSHIP ELECTIONS TO DISPLAY IMPROVED PROCESSES AND RIGOUR – Amina Zakari” posted on INEC official website www.inecnigeria.org .

We are not deceived. There has been no high profile prosecution and conviction for election violence or malpractices since the return to democracy in 1999. In other words, we are indirectly encouraging election rigging by filing to prosecute and punish violators. The 2010 Electoral Act as amended is replete with penalties for election offenses.

For example, concerning disorderly conduct at elections, Section 128 0f the 2010 Electoral Act (as amended), states that “Any person who at an election acts or incites others to act in a disorderly manner commits an offence and shall be liable on conviction to a maximum fine of N500,000 or imprisonment for a term of 12 months or both.” Has anyone been convicted and imprisoned in the last sixteen years for disorderly conduct at elections in Nigeria? It is interesting to note that you get a stiffer penalty for snatching a ballot box than for possessing a weapon.

Compare the following subsections of Section 128: “(3) A person who contravenes any of the provisions of this section commits an offence and shall be liable on conviction to a fine of N100,000 or imprisonment for 6 months for every such offence. (4) Any person who snatches or destroys any election material shall be liable on conviction to 24 months imprisonment.”Subsection (3) includes penalty for “ (1) No person shall on the date on which an election is held do any of the following acts or things in a polling unit or within a distance of 300 metres of a polling unit … (f) be in possession of any offensive weapon or wear any dress or have any facial or other decoration which in any event is calculated to intimidate voters;”

We are waiting for prosecution of election offenders and their co-conspirators, no matter how highly placed. Also, there is no reason why the card readers are not working 100% by now - unless, there is a premeditated reason with a pre-determined outcome in mind.

Atawa-Akpodiete, is a public affairs analyst.

Disclaimer: "The views/contents expressed in this article are the sole responsibility of Prof. Alex O. Atawa Akpodiete, Esq. and do not necessarily reflect those of The Nigerian Voice. The Nigerian Voice will not be responsible or liable for any inaccurate or incorrect statements contained in this article."
Articles by Prof. Alex O. Atawa Akpodiete, Esq.
22-2-2016  Kleptocracy In Nigeria:  The Real Politics Of Corruption13-12-2015  The Role Of Women In War And Peace30-11-2015  365 Days Later: Is Nigeria Better Or Worse Today?15-11-2015  Misinformation And Runaway New Media9-11-2015  James Bond In NigeriaMore...