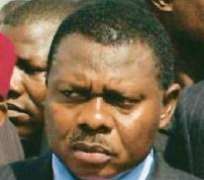 “The minister is travelling to Benue to see his mother after he comes back; he will be travelling to Ghana. You know people are trying to cover themselves nowadays. It will be good if you help us by contacting your editor not to publish this story. I must tell you that I agree with you totally about the building of the hotel in Gboko but please my boss doesn't want to be linked into it. I am now protecting my Boss; I must be honest with you. Please! What do we do? I've work with the former minister of justice for three years before Aondoakaa came. When Aondoakaa assumed office, he now asked me to work with him. All we are saying here is that, his younger brother Odu is the one that build the Hotel. But if I were to be the Minister, I will not build such a Hotel in my village”, stated the Personal Assistant [PA] to Mike Aondoakaa in the person of Alhaji Diri to ukpakareports.com over the new Hotel secretly erected by the embattled former minister of justice and attorney general.

New information recently made available to ukpakareports.com indicates that Mike Aondoakaa recently commissioned a 4-Star Hotel in Gboko. The Hotel which goes by the name “Old Band” was supposedly built using the younger brother to Mike Aondoakaa as cover. The younger brother goes by the name Mr. Odu. This is as a source who is currently employed by Mike Aondoakaa confirmed to our correspondent that “the Hotel has just been commission recently. The minister was there pretending as if he is not the owner of the Hotel. He used his younger brother Odu as the co-financier of the Hotel located in Gboko. The hotel, Old Band Hotel cost over N500 million and there is no concrete evidence of a job the former minister's younger brother Odu has done to enable him build such a Hotel.”

Further inquiry revealed that the Aondoakaa's erection of the “Old Band” Hotel to be an open secret in Abuja and amongst select editors of major national dailies. According to the information gathered, the contractor who built the Hotel for Mike Aondoakaa is brother to a reporter attached to NEXT Newspapers. The NEXT reporter is the older brother to the contractor – and he lives at one of the many houses owned by the contractor in Abuja. In addition, a distant cousin to Aondoakaa who used to be employed by Daily Mirror was reported to dish out N3million monthly to select editors of national dailies. The editors were five in number. The money was dished out to silence the editors and the newspaper.

Aondoakaa's activities while at the realm of affairs in the ministry of justice have raised many eyebrows as to the level of near criminality. On his appointment as the Attorney General and Minister of Justice, the first action taken by Aondoakaa was to beckon on the President to issue a directive compelling the EFCC, ICPC and other anti-corruption agencies to first seek clearance from his office before instituting a case against any suspect. With this move, he rendered the anti corruption agencies toothless.

Aondoakaa recently was stopped at the Abuja Airport on his way to Rome. Following some clarifications and clearances, he was released to travel. Many suspect, Aondoakaa to be on the run.