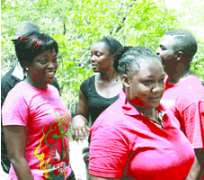 Funke Akindele has become the first casualty in the on-going Gulder Ultimate Search Celebrity Showdown. Her eviction was announced by Genevieve Nnaji, the task master and anchor of the show, after she was disqualified earlier on for failing the task for the day.

She mistakenly placed her left foot down on the platform at the river bank, against the task master's directive that it should be raised up. Funke said that though, her eviction was painful, especially as her fans were expecting her to go far in the reality show, but all the same, it was fun being part of the show.

Before the task master announced who it was to leave the camp, there was a deafening silence that pervaded the atmosphere. Everyone among the celebrities could hear the thumping heartbeat of the other.

With a gaze not trained at anyone in particular, Genevieve announced, “Funke Akindele, is disqualified after failing your task, you have been evicted. You will, immediately get your axe and smash your calabash, pack your luggage and vacate this camp.”
Commenting on her eviction, Funke said: “I felt really bad being evicted at this stage because of my fans that had great expectations and wanted Jennifer (her staged name) to win. But on the other hand, I feel good I am retiring to the comfort of my bed; as you can see, I feel very tired already.”

Funke Akindele, in 2009 won the African Movie Academy Award (AMAA) for Best Actress in a Leading Role. Akindele worked in a television station before switching to acting, becoming known for her role in the family-oriented Nigerian television show I Need to Know. Akindele has OND in Mass Communication from the Ogun State Polytechnic and a law degree from the University of Lagos.

The question on everybody's lips now is “who is next?” Probably, the answer to this question may emerge at the next edition of the reality showdown this Sunday. The programme which is in its third week, would be aired for 11 weeks on select television stations in Nigeria and beyond on both terrestrial and satellite channels. The Stations include; NTA, AIT, Silverbird Television, Africa Magic and Soundcity. Gulder has remained a top beer brand in Nigeria in the last 40 years with brand loyalty increasing by the day.