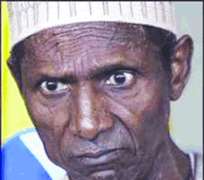 Yar'Adua
Any hope that ailing President Umaru Yar'Adua will return to office might just be forlorn after all, as an intensive care expert has advised Nigerians to perish the thought.

Following the visit of some Islamic and Christian clerics to Yar'Adua in the Aso Rock Villa, there have been claims that the President was recuperating fast and could resume duties soon.

But in an exclusive interview with Sun, a renowned cardiologist, Dr. Y. N. Eronmwon, said: 'At this point in time, one can medically predict that President Umaru Yar'Adua is in what we medical professionals call a Persistent Vegetative State (PVS). This is a condition where an individual in a state of coma is alive but unable to move or respond to his or her environment.'

According to him, the report that the President was recuperating is false and Nigerians should not expect much.

'In what capacity are they speaking?' she askekd rhetorically. 'Except they saw his physical condition just before the President left, saw him while he was incommunicado in Saudi Arabia and right after he came back unannounced in the ungodly hours of the night. I don't think those clerics are in a position to tell their fellow Nigerians the President is recuperating well.

'How on God's green earth can they ascertain that he is recuperating well? Nigerians must not let those so-called religious leaders in the corridors of power pull the wool over their eyes. Don't let those clowns parading themselves as clerics, constantly misleading the country by dressing their false claims with the togas of their religious positions, fool us. The President is a long way from recuperation.

'At the moment, he cannot rule himself, least of all ruling 150 million or so Nigerians. The man has lost his higher cognitive functioning and has about less than 20% chance of getting one-third of his brain function back. The man cannot recognize himself at this time, probably does not even know his own name right about now.'

Speaking further, the ICU expert explained that because of the health condition at this point in time, smiling, grimacing and spontaneous movements are behaviors construed as talking and gesticulating, and that his reported movement by the Islamic cleric were normal for someone in his condition.

'No, it cannot be true that the President is talking. Some of the aforementioned behaviors might be what the Muslim clerics saw and construed for talking. The President may appear somewhat normal. However, he cannot speak and he is not able to respond to commands such as lift your hand' or close your eyes.'

Listing the symptoms of someone in PSV state, he said: 'Mr President is in a Persistent Vegetative State. In this condition, the President's thinking abilities and awareness of his surroundings, to time and persons is lost. Only his non-cognitive function and normal sleep patterns is retained. His body is maintaining only the basic functioning of breathing and circulation; most likely assisted by the ventilator and dialysis. Some spontaneous movements may occur, for example, his eyes may open in a fixed position or track moving objects. He may exhibit some behaviors construed as consciousness, such as grinding of his teeth, swallowing, smiling, shedding tears, grunting, moaning or screaming without reason.'

The doctor stressed that only younger patients have come out of this kind of illness.

'It is too early to say he is recuperating well. From a medical standpoint, his prognosis is poor. In my medical experience, most individuals in coma and PVS condition for more than three weeks most likely never regain physical and intellectual awareness. The patients that do come out of this condition are younger individuals between the ages of 12 and 35 years.'

He contended that the President's medical team would probably be battling to prevent him from contracting pneumonia. 'The next stage for the President and his doctors is the constant fight to prevent pneumonia, contractures and deformity of the bones, muscle atrophy and bed sores as a result of his condition. The common cause of death for individuals in this condition is pneumonia. To prevent contractures and deformity of the bones, joints and muscle atrophy, the services of a physical therapist are needed.'

He however said the President could recover if all the clerics joined hands to pray for a miracle, which, according to him, was the only option left for him. 'From a medical standpoint, he will not be able to resume duty or finish his tenure except the hand of God touches him in a peculiar way.

If by a miracle he comes back to office, the President will not be making the decisions. Instead the cabal or the kitchen cabinet will be resurrected to make decisions for him. Medically, I will question his decision-making abilities if he resumes office. His recovery, if it ever takes place, will be extremely slow as a result of his age and time spent in coma and PVS.

'However, medical professionals believe that we treat and God heals. God is still in the business of performing miracles and that is the only option left for our dear President at this point.'