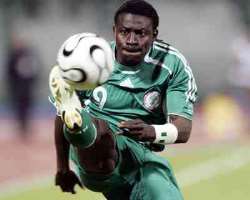 Fulham produced a superb second-leg display to beat German champions Wolfsburg and seal their place in the Europa League semi-finals on a night Obafemi Martins could not save the German club.

The Cottagers took 21 seconds to make amends for Wolfsburg's late goal in the first leg as Bobby Zamora neatly turned Jan Simunek and slotted his side ahead.

Grafite saw a shot blocked on the line as the home side pressed late on but Fulham held out for a deserved win.

They now face Hamburg in what is their first ever European semi-final.

The success continues a sensational European campaign for Fulham, who had eliminated defending champions Shakhtar Donetsk and favourites Juventus in the previous two rounds.

It is a fitting reward for an extremely determined and intelligent performance from the London side, who struck with their first attack and then frustrated their talented opponents.

Wolfsburg came into the game full of confidence following Alexander Madlung's late header in the first leg, which had given them a priceless away goal and a strong foothold in the tie.

Fulham were punished for a poor final 10 minutes last Thursday but it took the Cottagers all of 21 seconds in the Volkswagen Arena to rectify the previous week's last-ditch lapse in concentration as Zamora gave them the lead straight from the kick-off.

The in-form striker, who passed a fitness test before the game on an Achilles injury, collected a pass inside the area from fellow forward Zoltan Gera and stylishly set up a cool, side-foot finish past home keeper Diego Benaglio for his sixth Europa League goal of the season and 19th in total.

Roy Hodgson's men now face a trip to Hamburg on 22 April with the second leg at Craven Cottage on 29 April.