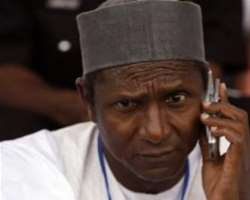 The foiled Christmas Day bomb attack on a U.S. airliner has put further pressure on ailing Nigerian President Umaru Yar'Adua to either confirm he is fit to govern or hand over to his deputy.

Yar'Adua has been in Saudi Arabia for more than a month being treated for a heart condition and uncertainty over how a succession would be handled if his health worsens risks plunging Africa's most populous nation into political crisis.

Vice President Goodluck Jonathan has been presiding over cabinet meetings but executive powers have not officially been transferred, leading a top lawyer to challenge the legality of decisions made in Yar'Adua's absence.

Jonathan ordered Nigeria's security agencies to work with the U.S. authorities to investigate the foiled December 25 attack, in which 23-year-old Nigerian Umar Farouk Abdulmutallab tried to detonate explosives on a passenger plane approaching Detroit, and the government has promised regular updates.

But there have been no public statements on the matter from the presidency, apart from comments by Jonathan published on its website in which he said the incident would trigger "unnecessary harassment and scrutiny to other Nigerians" travelling abroad.

"There's no doubt the vacuum in governance is doing untold damage to both our domestic affairs and our international image," said Lai Mohammed, spokesman for the opposition Action Congress party, though he added there was no reason to believe the country's security agencies were not fully functioning.

The involvement of one of its citizens in an attempted attack for which a wing of al Qaeda has claimed responsibility could not have come at a worse time for Nigeria's leaders.

"On the brink of constitutional crisis" screamed the front page of one Nigerian newspaper on the eve of the incident.

Presidency officials have said Yar'Adua is responding to treatment and the government says state business is going on as normal. But pressure has been mounting from the opposition and parts of civil society for him either to prove his fitness with a formal medical test or hand over power.

RULING FROM AFAR
The 58-year-old leader, who already suffered from a kidney ailment, was flown to a clinic in Jeddah on November 23 after complaining of chest pains and has been diagnosed with acute pericarditis, an inflammation of the membrane around the heart that restricts its action.

A lack of updates on his condition has fuelled speculation about the gravity of his illness in the Nigerian media, with some reports saying he is largely incapable of communicating.

The government has said Yar'Adua can exercise his presidential powers from anywhere and that contact is made with him on issues that require his approval.

A presidency source told Reuters on Tuesday Yar'Adua had signed a supplementary 2009 budget, taken to him by a government official, which covers spending in sub-Saharan Africa's second biggest economy to the end of March and which had been awaiting his approval.

But the government's critics have also warned of a crisis in the judiciary with the country's Chief Justice due to retire in three days and only the president able to name a successor.

Militants in the Niger Delta, the heartland of the OPEC member's mainstay oil industry, said 10 days ago they had attacked a major pipeline because Yar'Adua's absence was delaying peace talks in the region.

And on Monday, soldiers and police clashed with members of an Islamic sect in the northern city of Bauchi, killing at least eight people and highlighting the country's volatility as it approaches national elections in 2011.

NEW YEAR'S RESOLUTION?
Under the terms of the constitution, Yar'Adua could sign a letter to the heads of the two chambers of parliament saying he is temporarily transferring powers to Jonathan. Should he become permanently unable to govern, Jonathan would take over.

There would then be fierce competition within the ruling People's Democratic Party (PDP) for the position of vice president to replace Jonathan, as his deputy would be the de facto PDP presidential candidate in polls in 2011.

Jonathan, a southerner, is unlikely to stand in 2011 because of an unwritten agreement among the political elite that the presidency rotates between the north and south every two terms.

Nigeria celebrated a straight decade of civilian rule earlier this year and most analysts see the chance of military intervention as slim. But with issues needing the attention of an authoritative head of state piling up, clarity over who is really in charge needs to come soon, they say.

"With the international spotlight firmly on Nigeria, it has highlighted the apparent vacuum in key positions with no president or acting president to provide visible leadership," said Kayode Akindele, a director at Lagos-based financial advisory firm Greengate Strategic Partners.

"This has added to the building pressure to resolve the presidential issue before the new year," he said.