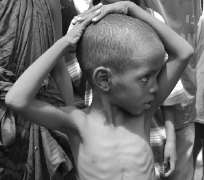 How do we keep this generation of talents happy at home in Africa to develop and advance our arts, culture and sciences to save us from ruin? Our best talents in Africa are young people that bear the cross of poverty at home but still conquer and excel. Nurturing environment enables African unique ideas to determine our relevance or usefulness to compete in the world market.

We are still fortunate in Africa otherwise our culture, religion and people could have perished. Despite all odds, Africans relentlessly become durable in the face of economic onslaught and degradation of our people mostly with our own cooperation. Yet generations after generation, not only do we retain our culture and languages, we managed to keep them even outside the Continent. Despite the situation of African Americans, they have developed unique world niche.

If two out of three children in a family abscond overseas without a trace of our grandchildren, stories would be told of those two we never heard of again. The Yoruba have a saying that eunuchs never have children nearby. Okobo ki b’omo si tosi. What became of those children overseas that either left on 707 planes or by boat crossing the desert becomes immaterial.

Indeed some ladies go to Africa, get pregnant and left spouses there. Realizing the dilemma, the rich that sponsor the children overseas have resorted to starting new families with young ladies hoping the children would be grounded in Africa so that their lineage will not disappear. It does not make a difference whether the sperm is still productive in their old age. There is that young lady that can make it happen either with a gardener or driver as in Lady Chatterley’s Lover.

On the same lineage thinking, men that gave up on their overseas oyinbo and African wives, are coming back home to Africa to start new families with the hope that their own lineage will not disappear. There are stipulation by these men in the two categories, that is at home and those coming back from abroad. They make sure their wives and children never leave the shores of Africa. Moreover, they are denied foreign passports but given education anywhere but abroad.

A friend of ours used to say his children are going back home to live in his village. We asked: if you cannot live in your village, in the nearest city or country, what made you think your children will. Like the Israelis, he still promises next year in Africa. One has to begin with one stone, one brick and one step to lay a foundation on a dry land. It may be too late to raise a child at home.

But for the children that remain in African countries building and keeping the tradition, cultures and language; there would be nothing to rely on. As we get older we feel some sense of duty to preserve our own culture so that future generation can survive and propagate the tradition that must endure the test of time. In other words, we must refine our culture so that all the fetishes, crude and uncivilized way of life can compete equally with other cultures.

How long we are going to survive depends on our children at home, not the children sponsored by the rich overseas or those poor children crossing the deserts. Most of those children are not coming back to live, they will only visit. Some will visit for weeks to bury their parent, others for summer of winter holidays. Even those with foreign passports living in Africa cannot wait.

The who is who of Africa, pride themselves on the fact that their children are trained overseas by foster parents, not by them. Former Presidential candidate in Nigeria, Chief Falaye reflected on this sometimes ago as he wondered aloud about his children and grandchildren overseas. It used to be that we studied and go back home as soon as we were done. If you stayed too long community would wonder if you were trying to kill your parents or vying for Mayor of London.

Now, parents actually encourage their children to go after greener pasture and stay where they could send money back rather than become a burden at home. When men and women come home on holidays, parents offer their daughters and sons to those willing to marry. So the girls can escape overseas with them. It happened more often with men coming home to marry, cut off oyinbo wives, until they learned that some of the new wives turned out, not to be angels.

It is disappointing to Africans in Diaspora that after paying their dues and getting all educated, their desired jobs compared to white counterparts, only come in a trickle or as a token. Even after getting their dream jobs and moving to the best neighborhoods, discrimination from neighbors and police still follow them there. So, in a three piece suit, your color cannot hide .

The children of these overseas Africans usually follow their parents home on holidays or other occasions. Many lose their languages and culture. We are usually happy when they eat some of our foods. But if their parents could not get our food to eat where they were, they substituted fine wheat for cassava and adopt other grain for fufu or millet. Fortunately, most African foods are now available overseas and there is no excuse for not eating some of the real thing.

It must be noted that Africans at home like all mankind have varied their tastes. Some of the foods eaten at home are not necessarily indigenous to the countries. A good example is bread. Trying to incorporate cassava with wheat in making bread is a continuous struggle because of adherence of taste to foreign seeds. It creates enormous demand for wheat farmers in country of origin. Believe it or not, some people are trying to create market for oats as fufu in Africa.

The same way Africans got introduced to food is the way we get adapted to many of the foreign culture that has diminished our capacity to expand and proliferate our own. It is so easy to get adapted to foreign taste and get hooked on it forever but to the detriment of homegrown food, culture, language or religion. This is how we craved for the countries built by others while we leave ours in disarray.