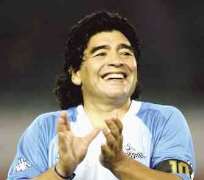 Argentine legend Diego Maradona has said that Lionel Messi is in the form of his life, claiming he is 'playing a kick-about with Jesus', but also warned he must maintain his focus.

Maradona is viewed as the greatest Argentine player of all time, but that title is under threat from the 22-year-old after a stunning season which reached its zenith on Tuesday night with a four-goal demolition of Arsenal in the Champions League.

Now the national coach has lavished praise on his star player, but warned Messi not to make the same mistakes that he did when he was a player.

'He's at a select level, being the best in the world and a star at Barcelona. Leo is playing kick-about with Jesus,' Maradona said.'There are moments when you are invaded by loneliness, but you have to be strong so you don't end up doing things one did,' he said, apparently referring to his drug addiction during his playing days.

Maradona added that after Argentina's World Cup warm-up win against Germany in Munich on March 3, he spent two hours with Messi talking about many issues.

'I told him I'd done my thing, now he has to make his career and at the end we'll see who was the greatest of all time. But he's on the right path. I saw that he's mature and full of will,' Maradona said. 'How could I not be happy for Messi to win the World Cup. The Maradona and Pele polemics will end and the best thing is that Messi is Argentine.'

And according to his Barcelona teammate Gerard Pique, who played with him as a youngster, Messi's talent was obvious from an early age.