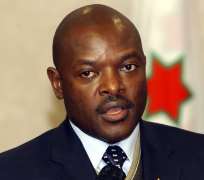 THE ongoing bloody riots in Burundi over a presidential tenure elongation bid have once again cast a shadow over the future of democracy in that tiny East African country. To many, the situation is a reflection of the tottering nature of democracy in Africa, where only a few have managed to play by the rules.

Weeks of intense protests in the capital city of Bujumbura and the second largest city, Gitega, against former rebel leader-turned president Pierre Nkurunziza's bid for third term in office, in utter defiance of the country's constitution, have already claimed 12 lives. Several people have been reported injured from live bullets fired by security agents, while about 40,000 others have fled the country, mostly into neighbouring Rwanda and Democratic Republic of Congo.

Unrest started when the ruling political party, CNDD-FDD, endorsed Nkurunziza as its candidate for the election coming up on June 26. This decision sparked an outrage from opposition politicians, students and civil society groups who perceive the president's action as an attempt to rewrite the constitution, which limits his tenure to two terms.

But Nkurunziza, who first came to power in 2005 amidst serious political upheaval, has countered by saying that he was not elected but was chosen by the parliament for his first five-year tenure. He has defied wise counsel, both from within and outside the country. The United States Secretary of State, John Kerry, while trying to convince the president to abandon his ambition in national interest, said, 'We are deeply concerned about President Pierre Nkurunziza's decision, which flies directly in the face of the constitution of this country.'

Protesters have been further riled by the decision of the country's constitutional court to give a stamp of approval to the president's ambition, a judgement believed by many to have been extracted by sheer intimidation. To this, the United Kingdom's Foreign and Commonwealth Office has already reacted through a statement, saying, 'Reports of intimidation against members of the Constitutional Court do not give the impression of an independent court that was able to come to an impartial decision.' Fearing for his life after refusing to sign the ruling, the vice-president of the court, Sylvere Nimpagaritse, has reportedly fled the country.

The crisis in Burundi is coming barely six months after similar mass protests forced a former sit-tight Burkinabe ruler, Blaise Campaore, into a hasty resignation from office. In what appears to be typically an African problem, the ongoing drama of the absurd in Burundi is not without some striking similarities with the unfortunate events that forced Campaore, president for 27 years, to flee his country in October last year.

He had similarly sought to give legitimacy to his tenure elongation ambition through an illegal constitution amendment. But, as the matter was being debated in the parliament, the people, who are the true custodians of sovereignty, took to the streets in very violent nationwide protests. In one of the poorest countries in the world, sharing that same status with Burundi, the people burnt down the parliament building among other important national monuments.

While the actions of the Burkinabe people were enough to send their despot into exile, it is yet unclear if Nkurunziza will be ready to follow the path of honour. Yet, the sacrifice of personal ambition for national interest is what recommends itself readily here, given the troubled history of Burundi, a country struggling to enjoy a semblance of democracy for the first time since independence in 1962.

At the heart of the long-drawn-out crisis in that country has been the struggle for supremacy between the dominant Tutsi minority ethnic group and the Hutu majority. This has created a delicate political balancing that has resulted in persistent tension, precipitating a 12-year ethnic violence that also ignited the genocidal massacres of 800,000 Tutsi in neighbouring Rwanda in 1994.

A year earlier, the Burundians had actually set themselves on the path of stability when, in their first democratic election, a Hutu leader, Melchior Ndadaye, had emerged. But no sooner had he been elected than he was assassinated, precipitating the violence that consumed over 300,000 people, mostly civilians. Afterwards, the Hutu Front for Democracy-dominated parliament elected Cyprien Ntaryamiru, who was also killed when his plane was shot down in Kigali, capital of neighbouring Rwanda.

The 12-year civil strife that followed was resolved by an election, which again produced a Hutu-dominated parliament in 2004. It was this parliament that elected Nkurunziza for his first five-year term. He was reelected in 2010 in an election that was boycotted by the opposition. He is now exploiting the process leading to his emergence in 2005 to try to legitimise his tenure elongation bid.

Although the force of law seems to be on his side, after the Constitutional Court verdict gave him the go-ahead to contest, Nkurunziza can still subsume his personal ambition under the overall interest of his country. If the people he is aspiring to rule are reacting that violently, then he should know that, in a democracy, leaders do not force themselves on the people. This is the message that the international community, especially the African Union, should take to the president.

He has been quoted as saying, 'I would like to assure the national and international communities that, in case I am elected now, this will be my last term.' That promise might not be necessary if he allows peace to reign, so that his country can transit from instability to stability and from poverty to prosperity.