Judges Save Sther, gives her lifeline
By Uche Peter 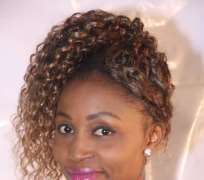 Lagos, Nigeria; May 9, 2015: Two more contestants in the on-going season five of the Nigerian Idol TV Reality Show have lost the chance to win the coveted multi-million naira show after they were evicted at the weekend. They are P.Scholes and Uloma

Show anchor, Illrhmz announced their names during the weekly eviction show held at the OMG Dream Studios, Omole-Ojodu, Lagos at the weekend. The eviction of the contestants has now swelled the number of evictees to five after three others namely Prime, Modele and Ayoka were evicted last weekend.

The duo, alongside Sther, polled the least number of votes and were accordingly expected to exit the Show, but the judges threw at Sther a lifeline to stage a comeback to the show and escape the inevitable fate that befell the other two.

Sther’s journey on the Show appears to correspond with the proverbial cat with nine lives. From a raw, tomboy living in Port Harcourt, she has emerged to be the face of the Show’s themed transformation after putting up a host of energetic performances to the admiration of the judges and fans alike. In this process, she has also survived two eviction scares, requiring in each instance a last-minute breather from the Judges.

The seven altogether will face further eviction tests through the public voting process to determine the eventual winner of the N7.5 million top spot cash prize as well as other multi-million naira juicy offers chief among which include a recording deal with South Africa-based Universal Music label.

Nigerian Idol focuses on discovering Nigerian youths with talent in music and giving them a unique platform to take shots at stardom. The eventual winner goes home with N7.5 million cash reward, a brand new car, a recording deal worth N7.5 million with Universal Music label and some high-end devices.

P.Scholes
I feel normal, though a lit bit sad that I could not scale through. It will be somehow sad breaking the news to my family because they gave me all the support I needed.

I will go back to school 400l Economics & Statistics